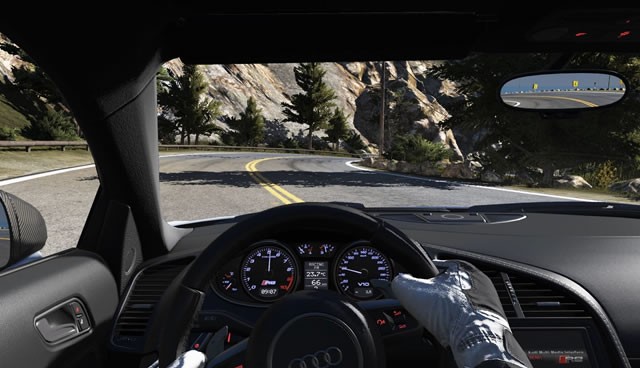 Kazunori Yamauchi is very serious when it comes to motorsport. Not only is the Polyphony Digital president creator of one of the most acclaimed video game racing series of all time, he’s a keen driver, too. And talking to him about how the additional power of PS4 Pro has supercharged Gran Turismo Sport reveals that the line between the game and the real thing are blurring quicker than you may think.


“PS4 Pro marks a historical moment,” says Yamauchi-san, speaking with us at a media event in London earlier this month. “It’s the first time video games are going to exceed and better the quality of images in movies, broadcasting, and packaged media out there.”​
With GT Sport, a powerful engine is everything — and PS4 Pro pushes the game into an eye catching fast lane featuring dynamic 4K, targeted 60 frames per second, HDR, an 18 GB VPS uncompressed stream, and wide color support. What that all means is the races are smoother, slicker, and more vibrant than they’ve ever been. And as any car enthusiast knows, the details are part of what drives the passion.

​
“I think the world of 4K and 60 FPS is a pinnacle for the games industry, and to be able to provide that sort of quality on a home console is something special,” says Yamauchi-san.

“All the cars look fantastic in 4K in terms of the detail improvements, but if you look at it from the aspect of HDR and wide color, about 11% of the cars in the real world today don’t fit into the standard color space that was possible in games up until now.

“Cars like Ferrari… it wasn’t actually possible to accurately represent that particular distinctive red in games unless you used the wide color space that’s now available in GT Sport. So the brightly colored cars out there are now going to look perfect in the game.”​
It may sound like something you’d take for granted, but it’s taken technology to catch up with Polyphony’s ambitions in order to get to this stage.

“In order to support HDR compatibility, we had to start with the development for a capable camera because there are no devices out there that were able to capture images in HDR and wide color,” explains Yamauchi-san.

​
“Doing that kind of data gathering wasn’t easy when we first started, so we had to design systems for the camera. In the past we’ve used RGB image sensors, but we had to utilize a spectra base image sensor to capture the proper colors and light that could not be recorded by RGB sensors in the past.”​
Don’t think that Polyphony is neglecting PlayStation VR enhancements in GT Sport, either. Yamauchi-san is eager to use PS VR to make sure you feel extra special behind the wheel.


“The raw, live feel that you get when you sit in the cockpit of a car using PS VR is something that wasn’t possible in GT before.”​
While remaining coy over what exactly to expect in GT Sport once you put on the PS VR headset — aside from the thrill of high speed, first-person driving, of course — Yamauchi-san couldn’t resist revving the engine on a couple of details.

“The tracks are very interesting in VR,” he smiles. “But we’re letting you explore the environments in virtual reality, such as the interior of cars. I think that kind of subtle usage is best for VR.”​
There’s clearly more info to reveal farther down GT Sport’s spectacular looking track, but between PS4 Pro and PS VR, things are only going to get better. Racing fans will have a lot to look forward to once Polyphony’s PS4 muscle car gets off the starting grid in 2017, but if you’re a GT fan this will be extra special.


“When we created GT games in the past, people always used to ask is there any way that the graphics quality could get any better, because it was already incredible. But with GT Sport you can really feel the light of the new world in Gran Turismo — and it’s an experience I’d love players to feel.”​

What do you think of this news? Let us know your thoughts in the comments below!