From the studio that brought you DmC: Devil May Cry, Heavenly Sword, and Enslaved is the new up-and-coming title "Hellblade". Hellblade is developed by Ninja Theory, and was announced at GamesCom this year, accompanied by a cinematic trailer showing you this title's protagonist, Senua, as she begins her journey in to the deep and dark world that is Hellblade. The GamesCom cinematic is simply to give us, the gamers, a small look in to what Ninja Theory have been working on. They are well-aware that this game is not going to please everyone, but are determined to deliver a quality, no-holes-barred game specifically for their fans and supporters.


Ninja Theory have interestingly decided to both develop and publish Hellblade independently, giving them the freedom to make the game that they want to make. This means that you can expect uncomprimised gameplay that is in no way, shape, or form watered down, or created in an attempt to please every gamer out there. Instead, they seek to create a game that is capable of scratching a certain itch that not many games can reach, without reducing overall quality, or diminishing production value. Ninja Theory has dubbed this an "Independent AAA" title, and have made it abundantly clear that this game is not an indie game, nor is it a AAA. This is an Independent AAA.

Another reason Ninja Theory have decided to produce this game independently is so that the melee combat - swordfighting, to be specific - can be as ruthless, or as awe-inspiring as they want it to be. This studio is extremely focused on delivering realism, immersion, and a unique experience that will not be easily forgotten. "Ninja Theory is defined by three things: ninja-class melee gameplay, strong character stories and a unique art vision." - Hellblade.com. I have a good feeling that we can expect to see all three of those qualities in Hellblade, and possibly stronger than we ever did before. 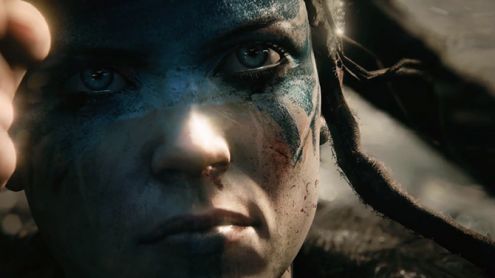 A close-up shot of Senua's face.​
Just from watching the trailer, I feel as though this game could be another great title from Ninja Theory. The graphics look stunning, and I personally think that it makes not only a good change, but an important change, to see a strong female lead character from a studio as large as this. Perhaps other studios may be able to follow in their footsteps, and truly unleash their creativity to its fullest extent. If this game takes off, it could inspire a revolution for gaming, allowing broader prospects and ideas for future games, and lifting the bar on what is seen as "acceptable" by gamers and critics alike. Of course, this could be quite a while away, yet.

Does this game look like it will scratch that particular gaming itch that we have all felt at least once?
What are your thoughts on Ninja Theory doing things their way, the way that they want?