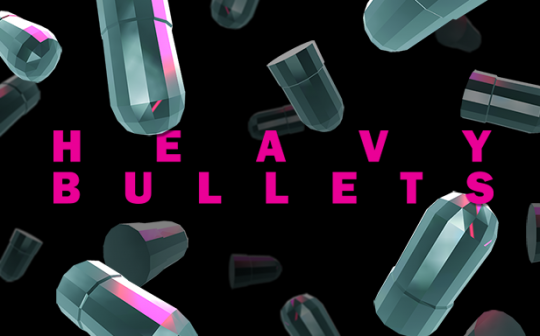 ​
Heavy Bullets looks and feels a lot like something you’d find at an arcade in the 80’s. And that’s fine, because the execution is fantastic despite its underwhelming amount of content. Heavy Bullets is a retro themed first person shooter slash dungeon crawler (without a dungeon) slash classic arcade FPS. When I say dungeon crawler I mean it in a sense that the objective of the game is to get from point A to point B, kill things, not get killed by said things, and enjoy the immense (though somewhat overdone at this point) retro style visuals. What the game lacks in content, it certainly more than makes up for in its gameplay as well as its impressive visuals.

The first thing I noticed about Heavy Bullets was the retro music. Very loud and very fast paced, which is nothing less than I expected from this shooter. The first thing I did was start a new game. That might sound like it’s a given but as I mentioned earlier, there is a limited amount of activities in the game, being that you can only do one thing and that’s the extremely linear story. I’m not bashing this fact, just stating it outright that the only thing you are able to do is play the FPS story, and if you should happen to fail you must start from the beginning. You should know what you’re getting into before you buy any game, and if this doesn’t sound like your cup of tea then don’t buy it, because you will be disappointed. However, if you enjoy a linear shooter and you happen to enjoy cool visuals at the same time then definitely pick up the game, but know that the repetition is very real.

The story didn’t grasp me at all when I first played the game. In fact, I couldn’t even tell you where I thought it was going to go because it was so vague. The only aspect of a story I’ve seen thus far is the first loading screen in the game (which is skippable by the way) and all that does is put forward some dialogue about some people possibly dying. Boring. When I got into the actual game though I was pleasantly surprised at how extravagant everything looked. It wasn’t so much powerful as it was simplistic, but that simplicity draws you in. The textures in the game are all very colourful and low poly, and the contrast between items is very well done. There are some occasions when an enemy will disguise itself by hiding in a similarly coloured bush type object, and while that is annoying, the idea behind it is clever.

You start off at the beginning of a maze type area that resembles a jungle or a forest of some kind (all of which is in the low poly, neon textures might I add, very stunning) and you must traverse this to reach the exit of each stage which is a ladder that brings you down to the next area. All you have to work with is a revolver with 6 bullets and 3 hearts. If you fire a bullet you must then retrieve said bullet, or another bullet found on the map or you will run out of ammo in all of 5 seconds and then die. I learned that the hard way. Twice. When you kill enemies they drop bullets and money, both of which are invaluable. The most common enemies in the game are called imps and they resemble a floating pac-man-esque black head. These coupled with the other common enemies from the lower levels; the snakes (the enemy that disguises itself as I mentioned previously) and the turrets, are all one bullet kills. I have not met an enemy yet that has taken more than one bullet to kill but I imagine the boss stages will be more challenging. These enemies can make quick work of you if you aren’t playing smart. While the game is very minimalistic, it still requires you to play competently and utilize everything you have at your disposal in an effective manner. This means pinpoint accuracy for every shot, you can’t afford to miss because that one bullet could be the difference between level 2 and game over.

When playing through the game you can come across certain collectibles or power-ups. These are either passive abilities like having an iron heart which is essentially a shield for one hit (think picking up a mushroom in Mario or a mask in Crash Bandicoot). The other type of power up is a onetime use item or ability, like a mine or a grenade of some sort. You may only hold one of these so think carefully about which you want. If you do get stuck, whether you find yourself in need of a power-up or just out of bullets, take a look around the map as there are vending machines scattered everywhere for you to use. These vending machines differ in stock but essentially you have your bullet vendor, your health vendor and your item vendor. You can buy some more complex items like the backpack or life insurance which will allow you to carry extra power ups or retain them after death. Money is somewhat scarce though as you only seem to get it from kills and as I mentioned, you need to keep your bullets so most of the time you will probably be buying ammo. I would advise against trying to save this money for later levels, as you never know when you’re going to die from a silly mistake and you might as well have anything you can at your disposal, as money does not carry over per play through.

The controls and movement of the game are sound. Nothing to write home about but they get the job done. The game uses standard WASD movement and everything is rather fluid. The game also allows you to increase (or decrease) your FOV which is something that I personally love about any FPS, and I strongly feel that this should be a standard option in all games. When playing the game, the only thing you see is your revolver so there is not much in the way of character chunkiness or anything of that nature. This is a given though because as I said the game is very minimalistic. As I have mentioned already numerous times, the graphics are astonishing. The game is not very resource heavy and has plenty of graphics options to optimize it to your PC’s standards. You won’t need heavy artillery like a TITAN-Z to run this game, in fact I was able to play (with horrible frame rate drops though I might add) with my integrated graphics. Though I do recommend having something slightly more powerful so that you can increase the settings a little. You don’t have much to work with bar some anti-aliasing and shadows but both still add a nice look to the game. Everything is low poly, neon and simple. Most textures are simply some neon triangles made up to resemble an object like a bush or a tree. This style has been overdone somewhat is lesser known games and was obviously a big hit in the past, but I like how Heavy Bullets has incorporated it. They've made it work quite well.

All in all Heavy Bullets is a fun, light shooter that will occupy you for a while if you have nothing else to do, or it will occupy you for hours if you are determined to complete it! The gameplay is standard while still maintaining some originality and it remains fun. The graphics are very pretty and extravagant, while still simplistic in a sense. The controls are easy to learn and the gameplay movement and control is fluid. You may find the odd bug here and there but the game has only recently come out of early access so this is expected. I find the game very difficult, but I enjoy playing it and I like to persevere and keep trying, just to see how hard the next level is and ultimately fail again, but all in the spirit of fun. I recommend this game to anyone who plays FPS, whether you’re a light gamer or a hard core one, you will still find enjoyment in Heavy Bullets.

Here is a short gameplay video to give you a feel for the game. Remember to subscribe to our Youtube channel! I'd also like to thank Alex for providing me with this game and the gift copy.


CONTEST!
Thanks to Alex, I have another copy of the game to giveaway to one lucky winner!
To enter, all you need to do is post below. Any posts in this thread will be considered an entry unless you state otherwise. A winner will be chosen on Monday/Tuesday so get posting!