Halo Franchise: A blast from the past to the present! 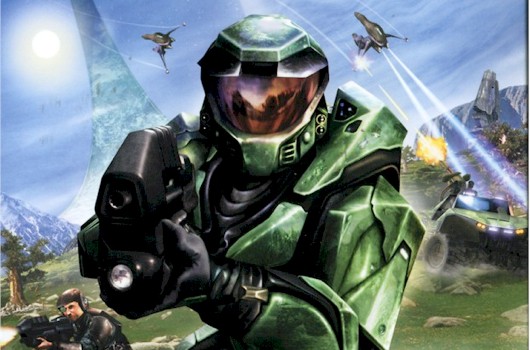 This is my 2nd written article and as you might tell from when you read it, I'm not that great. So any constructive feedback on how to improve would be hugely appreciated. For this article I'm purely basing this on the title releases of Halo CE, Halo 2, Halo 3 and Halo 4.

The development of Halo over the years has soared to be one of, if not the most widely favored game on the Xbox console. Here is just a solid overview of the four most played Halo games in the franchise, hoping that Halo 5 can be added to the history list when the time comes.

On the 15th November, 2001, Bungie; the ex-owners/developers of Halo, released Halo: Combat Evolved (CE), the first game in the franchise which had sold more than five million copies worldwide by November 2005. Petty Officer John-117, commonly known as Master Chief, began his epic journey along with his female artificial intelligence construct sidekick, Cortana, whom is connected to him through his armour. Together they battle to survive, to win the war against the Covenant, the Flood and to prevent the activation of the Halo rings, which leads on to the next installment.

Game critics, Edge, gave Halo: CE a rating of 10/10, the best review score the game had received. Edge also praised the game as "the most important launch game, for any console, ever", which in itself says a lot about the Halo franchise. The release of this title was set to change the gaming industry and bring a whole new level of entertainment to gamers across the world. And that's exactly what it did.

Bungie then went on to release the best-selling first-generation Xbox game of all time; Halo 2, which was released on the 9th November 2004. Chief & Cortana's journey continues from where it left off in the first installment. A new main character is introduced into the Campaign, a shamed Covenant commander; who is given the position of Arbiter, due to his fault of the destruction of Halo.
Installation 05, a new Halo ring, carries over onto the 3rd installment, which in my opinion, has the most action and excitement in the slow, tense build up of Master Chief's campaign to victory.

The statistics of this title are beyond amazing. By June 20th, 2006, more than 500 million games on Halo 2 had been played with a staggering 710 million total hours playing time on Xbox Live. And to top it off, by May 9th, 2007, a whopping 5 million unique individual players had been playing Halo 2 over those years. Game critics, IGN, had given Halo 2 a rating of 9.8/10, which was one of the best review scores that the game received.

The third installment of the franchise was Halo 3, which released on the 25th September 2007. Master Chief & Cortana's campaign to finish the fight continues, as the Master Chief partners up with Sergeant Major Johnson, the Arbiter and 343 Guilty Spark in a final effort to win the Human-Flood-Covenant war. Most of the campaign is set on an artificial structure called the Ark, in which Master Chief & Co discover that the Ark is rebuilding another Halo to replace the one MC had previously destroyed. Chief proceeds to activate the newly built Halo in order to wipe out the flood infestation, however, Guilty Spark who believes an early activation will destroy the ring and the Ark, is ignored by Johnson and disagrees with the Chiefs decision, thus resulting in his attempt to kill them both, to protect the ring. Chief succeeds in destroying Guilty Spark with Johnsons Spartan Laser, who was severely injured by the Guilty Spark. With Johnsons last words "Send me out with a bang", he later dies on the activation of the ring.

Chief, the Arbiter and Cortana escape aboard the ship; Forward Unto Dawn, to only be separated by Halo's explosion in a slipspace rupture, resulting in the Chief & Cortana to be stranded in unknown space. They eventually end up on Requiem, a planet that leads us onto the latest release in the franchise.

Halo 3 received a numerous amount of high ratings from various game critics, three of which were 10/10 ratings and one being a 5* rating, these review scores being the highest. Bungie made over $300 million in its first week and to date has sold more than 11.5 million copies, this making it the 5th best selling Xbox 360 game of all time and the best in the Halo franchise. More than one million people played the Halo 3 multiplayer in the first 20 hours of its release, which is absolutely insane. In my opinion, this is the best game in the franchise, but you may disagree.

The latest installment of the franchise; Halo 4, was developed and released by 343 Industries on the 6th November 2012. Bungie's run as the developers of Halo ended in 2010/11. They were replaced by 343 Industries. However, this sparked a huge debate between gamers, who felt that 343i wouldn't be able to continue the success that Bungie had achieved over the last 10 years. The release of Halo 4 was hugely anticipated by gamers worldwide, in hopes that 343i had accomplished the impossible by succeeding Bungie in producing another fine installment. These following statistics proved to be a massive hit for 343i and a debate settled between worried gamers.

- Grossed more than $220 million on its launch day, a new record for the franchise.
- More than one million people played Halo 4 multiplayer within the first 24 hours of its release.
- Over four million copies have been sold.
- Positive feedback from professional game critics.
- Three top ratings; two at 10/10 and one at 5*.

The release of Halo: CE was the fuel, that over 12 years has lead to the franchises success to the present day.

Gamers now frantically wait upon the release of Halo 5; the upcoming installment to the franchise for the Xbox One, with many gamers hoping that 343i can continue to impress and follow in Bungie's footsteps of success.

What are your thoughts on Halo 5? Are you excited?

Thank you for taking the time to read this extremely long article.