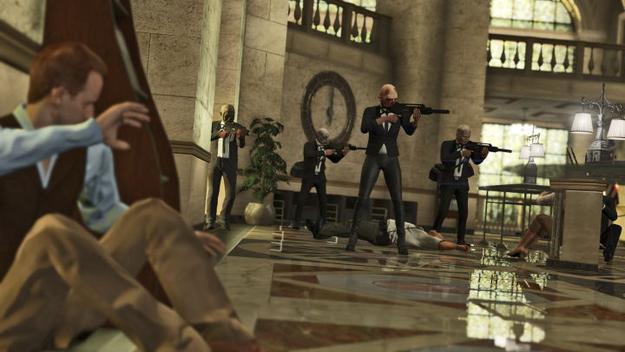 Se7enSins member NillxModz managed to dig out some information about the Heists not long ago, claiming Online Heists would be available December 23rd and also revealing content such as new vehicles and clothes. Because of his credibility and previous leaks, the news spread. Maybe as a consequence of this, Rockstar Games now confirms details about Online Heists in an interview with IGN. GTA Online producer and lead mission designer Imran Sarwar does not say anything about an exact date, but reveals the highly anticipated four-player co-op mode will be available early in 2015.

Players have been waiting a long time for this mode to be released, and Rockstar has received some bad feedback because of the continued delays. Heists allows players to plan, prepare and execute multi-tiered robberies across new locations in Los Santos and Blaine County and require communication and coordination as players take on specified roles at each point to accomplish multiple objectives. This addition also includes brand new vehicles, weapons and clothing.

When asked why this has taken so long, Sarwar explains that it turned out to be a lot more difficult than they originally thought:

"As it turns out, creating missions of that complexity for multiple players at the same time was much more difficult than we anticipated and every time we thought we were close, something would send us back to square one. Having already let players know of our intentions with Heists, every setback only increased the pressure to make sure we got them right."

They now feel that they are on the right track, and are confident that even a low key role as a driver will have something meaningful to keep him busy while the rest of the team makes their way to the loot.

"Even as we were working to solve this, the entire team was also throwing everything we could into creating the PS4, Xbox One, and PC versions of Grand Theft Auto V – adding First Person Mode, building the new replay editor for PC – as well as constantly working to improve the GTA Online experience. All of these projects are linked and require the attention of our core team at all times, so despite our best efforts, we simply wound up needing more time to make sure every one of these projects was as good as it could possibly be." 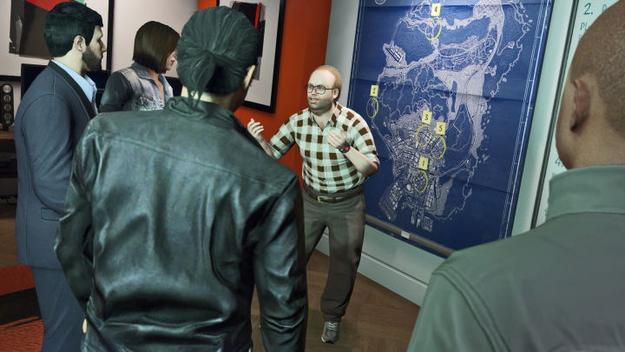 Sarwan further explains that the Heists are set up to require 4 players all at rank 12 or above, where one player gets to be the Heist Leader. The leader needs to have a high-end apartment to set up the planning board, and from there missions can be launched and all the work required in advance of the event itself will be done there. Lester is the Heist contact, and will let the leader know when there is news of a job. The leader then needs to gather his crew. The benefit of being a leader is the ability to assign positions, pick outfits and allocate each player’s cut. But most benefits comes with a cost as the heist leader is personally putting up the money to set this all in motion. The rest of the crew will get cash for each prep mission, as the hired guns they are, but the leader will have to wait for the Heist to be executed successfully to get paid. The differences in risk and reward in the roles as crew and leader is set that way to inspire players to try both and not always stick with the same role.

"There are five unique strands involving over 20 total missions, which will add up to around 20 hours of gameplay."

The different missions are set up to offer variation, and do not have set pattern with different dialogue and locations only. Players have to work as one unit in one, the next might require players to fill specific roles and others could have players split into two teams. Sarwan says they want to "push the co-op aspect and make players feel like they need to communicate effectively and work together to pull off each element." To finish the last part of a Heist, the so-called finale, members of a crew will have to fill several roles and make sure to follow the plan in order to pull it of successfully. The new vehicles, weapons, clothing and items will be introduced throughout the Heists.

To achieve the desired replay value, Rockstar tried to incorporate variety and open-ended gameplay, big set-pieces and a few surprises. Players will be also be given rewards for playing a certain way; playing all five heists in order with the same set of players will give one bonus, while playing all of Heists in first-person mode on PS4, Xbox One or PC will give another. Elite Bonus Challenges are given for completing each part of a heist meeting a certain criteria, for example within a set time frame, taking low damage or having high accuracy.

Developer Rockstar has delayed this so many times, last time they said it would be a part of the next title update after 1st person mode was released. Is this another "We will be done soon" announcement that will be followed by yet another delay? Is Q3 2015 just as likely? For now, all we have is the word of producer and lead mission designer Imran Sarwar. We will have to wait and see what that is actually worth.

What do you think of the way Heists are set up? Is it "too little, too late", or are you still aching to get your crew together for this?

Credit to Vino for the topic submission. Thank you!