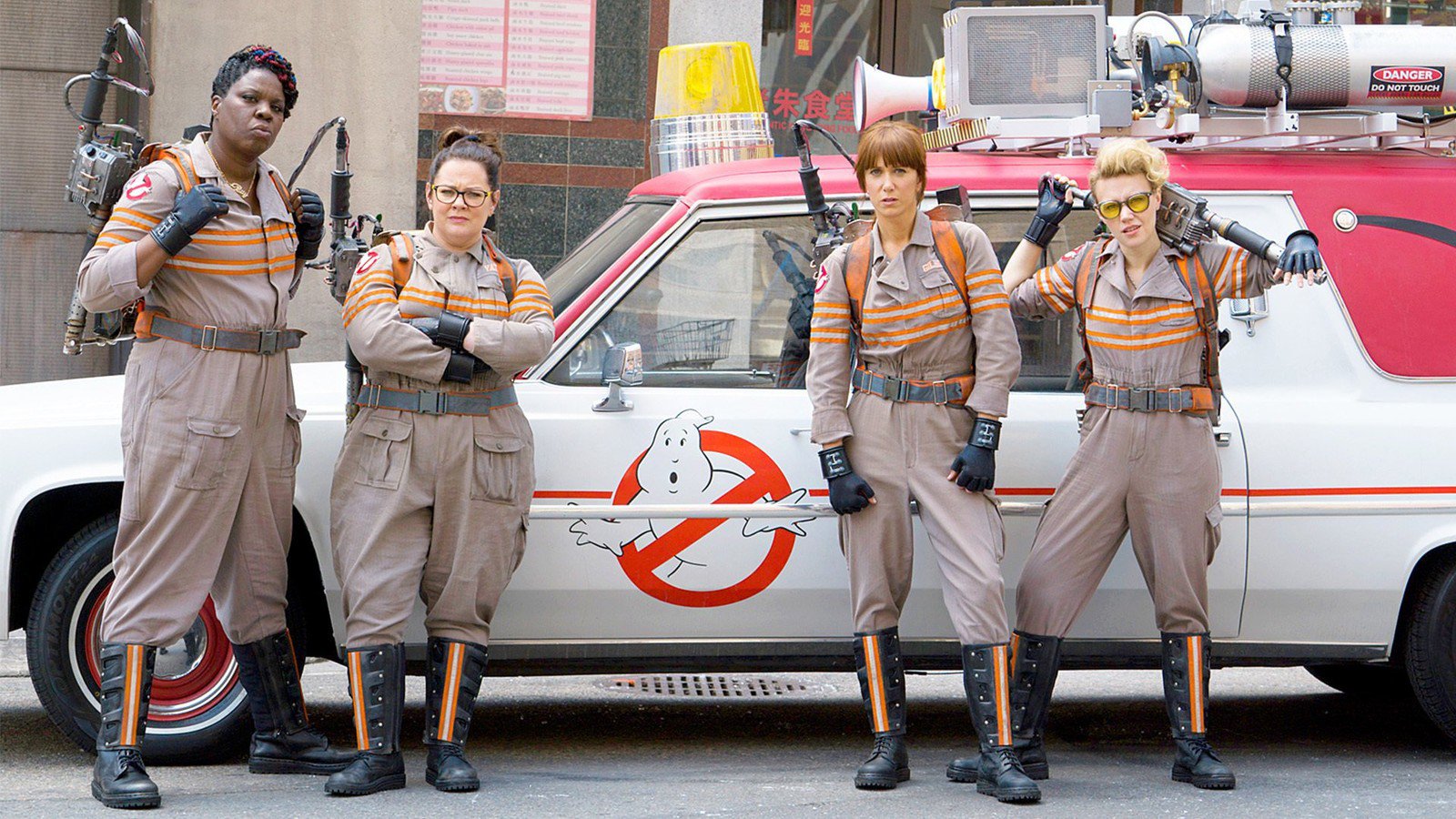 Okay, so there's probably not a single one of you that hasn't heard of this movie, and there's probably not a single one of you that hasn't already formed an opinion about it. Either you love the furthering of a feminist agenda or you despise the idea that this movie panders so hard towards women. It's trendy to have an opinion on this movie even though it hasn't come out. If you look at the Rotten Tomatoes reviews and then compare them to the IMDb reviews, you'll see a pretty profound contrast between the two. After watching the movie, I've discovered that it's really not worth having such a strong opinion over. It's going to anger a lot of people who don't like feminists and it will probably stroke most feminists off, but from an objective scale, this movie is pretty boring and unmemorable. With bland, unlikable leads, a bunch of bumbling side-characters, disgraceful cameos, a dull script, and bored, detached direction, Ghostbusters is definitely not a movie that deserves to have its title.

I will be the first to admit when I first saw the trailer for this movie, I loathed it. Not because it was so pro-feminist, I'm not really against feminism. I just thought that it didn't look like a very funny movie. It looked like it was full of slapstick and a script that is lazily filled with physical gags rather than interesting, witty dialogue. And sure, that will entertain enough people, but it certainly isn't enough to stitch a comedy movie together, nor is it anywhere near enough to warrant the Ghostbusters title. This is a very lazy and half-hearted effort to just squeeze money out of audiences, and that's really its primary concern here. It's really only dominated by women to pander towards a certain group of people and spawn a lot of controversy, which it obviously has. On Friday when this movie widely releases, the critics score on Rotten Tomatoes and the audience score is going to have a giant gap. This movie simply isn't worth all of that effort.

Let's start with the most important thing: The ladies. How do they hold up to the real Ghostbusters? Well, to be honest, they don't. None of them have any real sort of charisma or reason to be here. None of them are crafted with any sort of care or passion; they are just people that bust ghosts, I guess. Kristen Wiig does a fine job, I've never had any problems with her comedic chops or her acting efforts. She is definitely one of the best things about this movie. Melissa McCarthy, like always, is a loud, bumbling idiot who goes way too hard for all of the easy laughs and she achieves none. I actually paid attention to how many times McCarthy made me laugh: None. Leslie Jones is pretty passable as well, she's not exactly anything to remember or take notice of but she definitely pulled her weight and gave a perfectly fine performance here. Kate McKinnon stands out quite a lot, however. She's agonizing to watch. She is trying way too hard to be this crazy, insane character, and I winced almost every time she was on screen. She makes this movie difficult to look at, and I found myself subconsciously plugging my ears most times she spoke. She is an excruciating presence and actively drags the movie down every time she talks. She is, by far, the worst character in this movie, and that's really saying something for a movie that has Melissa McCarthy in it.

Now, what about the direction? Well, this movie was helmed by cinematic sadist Paul Feig, who has brought us such atrocities as Spy, Bridesmaids, and The Heat. As I mentioned above, the direction is uninspired and lifeless. Nothing really stood out about it. None of the angles are really dynamic and Feig doesn't populate his backdrops with anything memorable. It feels pretty cookie cutter, "now stand here, do this. Action! Cut!" and it's kind of sad to see that. Ivan Reitman directed the 1984 original with a lot of spark and obviously had a lot of fun doing his job. Feig, however, goes through the motions and directs his ladies with the sort of uninspired vagueness you'd expect to see in a direct-to-TV movie, not a major Hollywood production that's called Ghostbusters. I know that everyone thinks Paul Feig directs funny movies, but he was one of the worst choices for a movie like this. Give it to Adam McKay, who knows what he's doing outside of mindless comedies and who isn't afraid to give his material some creative spark. Anything but Paul Feig would have done much better, honestly. A bonus of not having Paul Feig directing this would have meant the omission of McCarthy, since those two seem to be a dual package.

The writing and jokes in this movie are bland and rote. While I can't say I didn't laugh at all in this movie, I didn't laugh particularly much. I remember giggling and chuckling sporadically, but I never really laughed very hard or very often. Some of the drier humor was entertaining and made me break my hardened facade, and I'll give the movie credit for that. I really didn't want to break my stone exterior for this, but it happened a few times in the form of a wry smile or a chuckle. For the most part, though, this movie is a collection of stale pop culture references and bad physical gags. It was really kind of a waste of Kristen Wiig's talent to be making jokes she visibly knows she's above, but that's the kind of level this movie is on. While pandering to one specific group of people, Feig decides to stay so safe and bland with his script that there is nothing that really stands out here. When the original's jokes landed so often and produced so many belly laughs it's really a shame to call the few chuckles this movie gave me the script's strongest points.

One thing that really, really irked me is this movie's depiction of men. Now, I'm not some guy who is against feminism, but Ghostbusters goes way overboard in trying to depict men as bumbling idiots. While Chris Hemsworth's character provided a lot of solid lines, he's also a cartoon character in how stupid he is. I'm not even kidding, all he does is screw things up and become fodder for the women to seem more intelligent and powerful. I don't really care if the four main characters are all women, I really don't, but when you uneven the scales this far it's pretty obvious what you're trying to do here. This almost seems like propaganda in how cheesy and fake it is. Even poor Bill Murray and Dan Aykroyd are given such treatment, and that killed this movie the most for me. The fact that even the cameos of the beloved original cast are given the "all men are stupid pigs" treatment is such an atrocity, not just to the idea of equality but just the original movie which a lot of people hold dear. Feig essentially slaughters the 1984 original, and I'm not just saying on a figurative level. This is a full-scale reboot. In the world of this movie, the events of the 1984 original never happened. They are nowhere to be found. This movie has the courage to just erase all of that, the movie that is clearly superior in every way and it just does away with it. This movie is the equivalent of that one smug friend who thinks he's better than everyone else, and who you want to secretly punch all the time. Why are you even friends, again?

If I could describe this movie in one word, it would be "meh." If I could describe it in two, it would be "mildly insulting." Yes, this movie has an obvious agenda behind it, but is it really worth getting that angry over? The movie isn't even good! If this movie was any good, maybe there would be a reason behind all the outrage, but honestly, you guys, it's just not worth it. This movie really isn't anything to give so much attention. I would advise you guys to just not see it, since it's not very good and I definitely don't want a sequel of this failure to come out. The next few days of internet browsing are going to be an absolute storm because of this movie, but it's simply not worth the time. The depiction of men is pretty scummy, yeah, but this is a 105 minute piece of cannon fodder. It's the kind of movie that plays in the background of a family gathering in a room populated by nobody. Someone in the other room asks "Hey, what's on the TV in there?" "I don't know, Ghostbusters I think?" "Oh, I love Ghostbusters!" "No, it's the recent one with Melissa McCarthy." "Oh. Nevermind, then."
Ghostbusters (2016) is background noise, and is not worth several angry, caps-lock-infested rants that you put everywhere on the internet, on either side of the coin. Just trust me here and don't see it. It's not worth your time to acknowledge that this movie exists.

Oh, did I mention that until the finale of this movie, there is one ghost that gets busted? One. That's how boring and lifeless this movie is.
About author