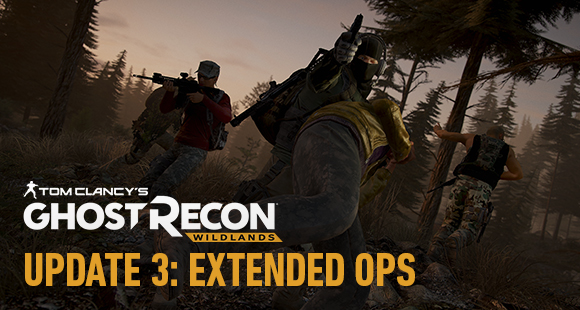 The next free update for Ghost Recon: Wildlands is now available. Ubisoft has rolled out the Extended Ops expansion for PC, PS4, and Xbox One today, January 25, introducing new maps, an additional game mode, and loot boxes to the online shooter. The Extended Ops update is available to download now on all platforms, though its size will vary depending on which version you're playing. The expansion weighs in at 8 GB on Steam and 14 GB on Uplay, while it can be as large as 13.5 GB on consoles. The centerpiece of the update is a new Ghost War PvP mode called Extraction. In it, one team is tasked with escorting two "high-value targets" safely out of a conflict zone, while the other team tries to prevent the hostages from being rescued.

Two maps will be available at the start for Extraction: Institute and Garage, both of which are playable in Quickplay and Ranked modes. Ubisoft has also tweaked a number of classes in Ghost War. The Predator's Assault-specific HP bonus has been removed, and Ubisoft has reduced the amount of HP you gain when activating Adrenaline Rush. Additionally, the Medic's drone will now be marked one second after being launched, rather than six.

In addition to the new mode and maps, the Extended Ops update introduces loot boxes, known as Battle Crates, to Wildlands. These crates are available in both Wildlands' Campaign and Ghost War modes. Those that can be obtained in the Campaign are called Spec Ops Crates and contain Epic weapons, Exotic weapons, vehicles, and "tons" of cosmetic items; Ghost War Crates, meanwhile, are found in Ghost War mode and are purely cosmetic. They contain Exotic weapons, other customization items, and a new line of player skins called Icons. Ubisoft says that each Battle Crate will contain three items you don't already own, ensuring you never pick up duplicates. The crates can be purchased from the in-game store for 400 Store Credits.

You can read the full patch notes for the Ghost Recon: Wildlands Extended Ops update on the game's official website. This marks the third big update Ubisoft has rolled out for Ghost War mode so far; the previous expansion, Jungle Storm, arrived back in December and was themed around Predator.