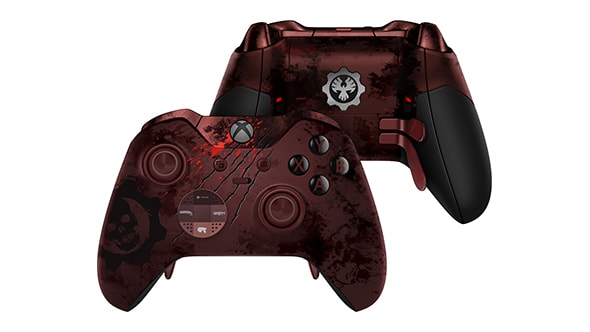 Microsoft unveiled a Gears of War 4 themed Xbox One Elite controller during E3 last month and has now made it available to preorder at GameStop and the Microsoft Store, with a starting price of $199.99. The controllers will be expected to be in short stock and will arrive on October 4th, a week before the official Gears of War 4 launch, so be sure to get one while you can. Be sure to check out some more pictures in the spoiler below!

The controller will feature many interchangeable Gears of War-themed thumbsticks, D-pads, and paddles. Also packaged with the controller is a unique multiplayer item and three Gear Packs that players will be able to use in-game. Gear Packs will allow players to get items such as Characters, Weapon Skins, Emblems, Bounties, and Horde Equipment and Abilities.

If you don't have the money to spend on this limited edition controller, you may still be in luck. Microsoft also unveiled two more Gears of War 4 themed controllers. The first is based on the game's protagonist, JD Fenix, and his grey and blue armor, priced at $74.99. This controller will also be released as a GameStop and Microsoft Store exclusive and will provide players with three Gear Packs. The second is a "Crimson Omen" controller that will also be priced at $74.99 and provide many of the same benefits that the JD Fenix themed controller will.

Gears of War 4 is set to launch on Xbox One and PC on October 11th later this year. You can check out the Limited Edition console and other controllers by clicking here! Will you be purchasing Gears of War 4 when it releases? Let us know in the comments!