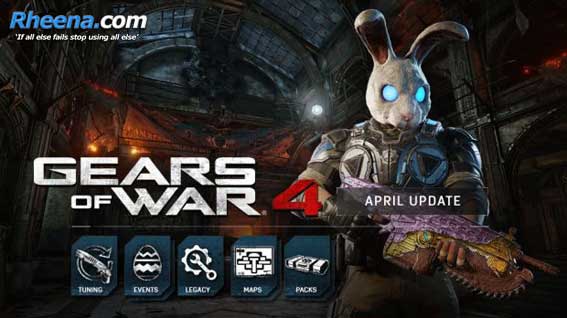 Microsoft has announced the details of Gears of War 4's April update, which adds new maps, Easter-themed content, and balance changes, among other things. All of this was covered on Xbox Wire. Starting with the Easter content, this includes a new mode called "Bunny Hunt" that gives players giant bunny heads that sort of look like Frank from Donnie Darko. Additionally, there are five chocolate Easter egg weapon skins that you can unlock. Microsoft will announced more details on the Easter content next week, with the event itself starting on April 14. Easter itself is on April 16.

People who own the Gears of War 4 season pass can play the new maps right now in the game's Developer Playlist, and can earn double XP and a 20 percent bonus credits boost. The maps will become available for everyone (for free) starting on April 11.

What's more, new Horde and Versus events are scheduled to begin on April 21 and April 28, respectively, though Microsoft did not share any more details about these.

Finally, Microsoft is rolling out new weapon tuning changes for Gears of War 4 in April. This is described as a "major update" for both Core and Competitive.

"Our Core changes mostly focus on making the starting weapons fit their role better than before, with reduced range on the Gnasher, improvements to the Hammerburst and slight tweaks to the Lancer," Microsoft said. "For Competitive, it's all about adjustments that highlight the teamwork and competitive nature of playing with these team-focused settings."