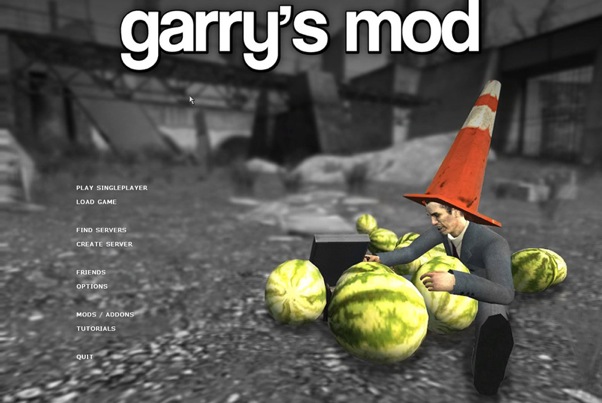 Garry's Mod, commonly known as GMod, has recently earned over $30 Million according to a tweet by its creator, Garry Newman. The physics sandbox title has been available for a $10 purchase and download via Steam since 2006, with its most recent version being released back in October of 2012. Newman recently made a subsequent tweet informing the public that his game, Rust, has in fact already earned him .34% more revenues than GMod. There have been over 1 million purchases of Rust thus far, and it has only been available for 2 months at $20 per purchase. Both games, not only because of their revenue statistics, are worthy of praise.

GMod, being a nonlinear sandbox title, is often used with the player's creativity as its primary focus. In fact, a lot of the game's creative features are utilized by players to make custom gameplay videos for YouTube. The game requires the player to own at least one game based on the Source Engine such as Half-Life 2, Counter-Strike: Source, Team Fortress 2, or Portal. Within GMod itself, the player is able to spawn, place, and manipulate objects from any installed Source-based game as well as from a collection of community-created objects. Two items, the Physics Gun and the Tool Gun, are key for such tasks. By using the Physics Gun in game, the player is able to pick up, move, and freeze objects in place. The Tool Gun allows players to perform such tasks as combining objects, attaching objects together via ropes, and creating controllable wheels and contraptions which follow the laws of physics based on the Havok Physics Engine. What makes GMod especially fun is the multiplayer functionality which is held on community-operated servers. Along with this comes virtually unlimited possibilities of mods and add-ons due to the title implementing the Lua scripting language. This allows players to be able to make and implement their own weapons, entities, game modes, and skins. Some notorious mods include "Zombie Panic" and "Trouble in Terrorist Town." With the ultimate creativity as its driving force, GMod has attracted many buyers and has tempted many console gamers to sway over to the PC gaming world, myself included.

Going further in sales is the sandbox survival title, Rust. The multiplayer game is set on a remote island, on which players must gather and research resources to survive. Players start by carrying a rock, a torch, and 2 bandages (there is no map in the game). From here the player can gather resources by finding them within the wildlife of the setting and can then craft other objects from an initial list. As the player progresses he/she can find blueprints, enabling the player to be able to craft more advanced items. During the game's course, players will need to fight to survive challenges such as starvation, drowning, hypothermia, attacks from wildlife, and radiation exposure. Perhaps the most difficult challenge is being able to defend oneself from attacks made by the other players within the game. It is advisable to make a few friends quickly in the game and form a group, formally a faction. By forming a "faction," players are able to provide for each other and participate in organized attacks on other players or factions known as "raids." Alternatively, a player could choose to fend for themselves in an isolated fashion. Although they will be able to keep everything they come across and not need to share, if a group of players sees such a player, the player may be singled out as an easier target.

Undoubtedly, both GMod and Rust are games worthy of praise. The games aim to promote creativity amongst its players along with challenging the players in certain scenarios. With both title's sales being as well-off as they are, it is evident that they provide unique and memorable enjoyment. If you have played or plan to play either of the aforementioned titles, feel free to post your thoughts below!