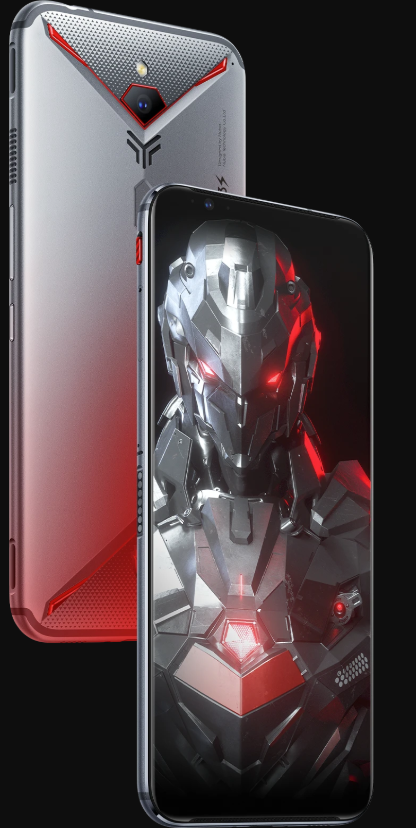 Red Magic 3S Gaming Phone Review​
Where to start with this supposed "phone"? Can you even call something this beastly a phone? It’s more like a powerful handheld gaming unit that just so happens to have cell phone capabilities, video recording, picture taking, etc. But let’s start with the design first.

Just like anything online, pictures have a hard time capturing the beauty you are presented with in person. This phone has a 6.65-inch AMOLED display, 2,340 x 1,080 pixels, with a pixel density of 388ppi, and a 90Hz refresh rate! The design of the back case of the phone is an attention getter to say the least. The beautiful metallic red to blue transition with the flashy LED light strip in the middle of the case (that you can turn off and on via the Aurora band toggle) is super sexy! People will ask you what phone that is.

The camera takes great pictures with their 48 megapixel, wide-angle lens camera. Even the front facing has a 16 mp camera. You can record videos in 8k! That’s insane! The only downfall with that is you can’t play them back.

It comes with a large storage capacity of either 128gb or 256gb so you shouldn’t be running out of room any time soon after you install all those big game titles like Call of Duty, PUBG, Fortnite, etc.

It has a long last battery with 5,000mAh, including a fast charge, so even if you game throughout the day, you will still be able to browse the internet, answer phone calls and text messages, and upload your gaming videos to your favorite streaming service without the dreaded “You are 15% battery” warning. Even if you do run low, the fast charge will get your phone back to 100% in no time (I haven’t tested the time but if I were to guess, from 10% to 100% it took around 1-2 hours, but I have never kept a close eye on it). On days I didn’t do much on the phone, I was able to extend 1 charge out to about 2 days and could have probably pushed it another day with it being totally drained at the very end of the work day.

This is where this gaming phone sets itself apart from so many phones out on the market. First, you have a switch that can take you from being in “cell phone mode” to “gaming mode”. Once you flip that switch, it takes you a custom gaming hub, sort of like one of the Xbox 360 modded dashboard styles, where it shows you all the games you have installed.

In this menu, you are able to turn on or off many features such as activating the cooling fan, you can block calls and messages, you can screen shot within your game, you can activate recording and streaming, turn on performance mode, and more.

You get 8-12GB of ram, a Qualcomm Snapdragon 855+ / Adreno 640 processor, and powerful stereo speakers with DTS-X. Combine that with the beautiful display and super cooling fan (which has speed options) to keep your phone from burning your hands up, you can game on this phone as if you had a console and TV right in front of you.

This phone has built in shoulder triggers to make playing your favorite shooters that much easier to plan on the phone!

This phone was built to run any mobile game thrown at it, while keeping the phone cooler than the hot potato phones on the market, and allowing you to play for hours on end.

How did it perform

I only casually gamed on my old phones in the past but I can say, I look forward to getting more into mobile gaming after using this phone. Call of Duty and PUBG ran great for being on the phone (I’ll still always prefer an actual controller in hand, which you can actually connect your Xbox One controllers to now - sadly, I haven't done this yet). I let the kids play some Pokemon Go, which played great! I’m so use to the phones getting hot rather quickly while the game is loaded up but the phone stayed rather cool while we were walking around in 80-degree weather.

As for the phone features, I would say it is your typical new Android OS phone, snappy and responsive. Only time will tell after I bog it down with more pictures and videos of the kids, more games and apps, etc. to see how it really performs. Phones always seem to do well those first couple of months, which is why I took about 2 months before writing this up, but I still think 2 months may be too little in the long run to see how the performance holds up. If I were to guess, this is going to continue to perform well and outperform my last phone, Galaxy S8, after heavier use.

I love the larger battery. Phones have become another appendage for most of us in society so when you see that battery draining on what feels like rapid speed, it sucks. With this phone, I didn't have to worry about it at all as I knew at the end of the day, I'm going to still have about 60+% battery when I lay down to bed.

While all the above are absolutely amazing, there are some things that may annoy some users. This phone is not waterproof, you can’t wirelessly charge it, there is no microSD card slot (I hate that they skimped out on adding this), and there is no NFC so if you have a wireless wallet and pay at places with your phone, this phone cannot do that for you.

The menus in the gaming mode have been translated from Chinese to English so some of the names of the options do not make much sense. There are some words that get cut off by the button not knowing exactly what it is and the documentation on the phone is quite lacking. I tried looking up what each of these buttons do and couldn't find anything on it. Everything was trial and error.

There are some camera stabilizer issues, where if you have shaky hands, it doesn’t have a built in (or a good one) stabilizer so your pictures do not turn out blurry. I’m not a camera expert but when I did look up what others were saying, there were complaints about there being too much contrast and the sharpness being too high. Being a casual picture taker, I thought they turned out great and better than my previous phones (Note 3 and S8).

They weren’t able to send any accessories with the phone like I had hoped, so just looking at them and the descriptions, there are some pretty cool accessories you can get for this phone. You can connect 2 “joypads” (as I call them) to the phone so you can essentially turn your phone into a controller with a display in the middle. There is a “Dock” accessory so you can connect your phones internet via LAN, fast charge from the dock in landscape mode, AND connect your hardwired headphone to it. The dock will move all the wires out of the way so you aren’t fiddling with them while you are gaming.

Looks like they have some cases, one of them looks like it will provide good protection (probably will be buying that soon, I don’t trust my kids or wife lol), they have “Nubia Pods” (like the Air Pods), and a tempered glass protection (another I’ll be buying soon).

I really like this phone. It was sad when I had to get rid of my Note 3 but I think I’ve finally found a phone that can meet my needs like the Note 3 did. The gaming was smooth and fun, the phone remained cool, it took many nice (IMO) photos of the fam, and I love the battery life on this thing. It’s a bit on the heavier side, probably due to the cooling system, powerful speakers, and the battery, so I can ignore the weight due to the benefits it provides.

At the price point of $479 (£419), I’m not sure you can beat it with any other phone that matches it's power, battery life, the performance features, etc. on top of not having a cell phone contract, all while having a great gaming device that you literally carry everywhere with you. Looking forward to putting some emulators and roms on there soon!

I feel like this is something that sounds cooler than it actually is. Plus cell phones cost way too much these days. The new iPhones are over $1000 now it's insane. For $479 I can buy a PS4 Pro or Xbox One X bundle..