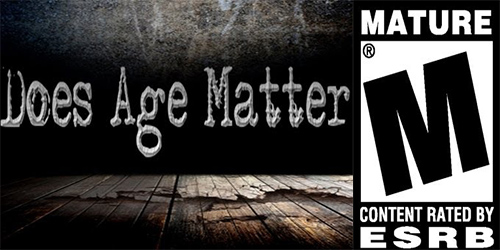 ​
It's no secret that the ratings of games are ignored. Not only games, but did you know Microsoft technically "requires" at least 13 years of age before signing up to Xbox Live? Obviously, at a younger age, we feel it's not necessary to wait until we reach that age. The reasons for these ratings and recommendations may be beyond your understanding at that age!​
​
Why on earth do I need to wait until I am 13 to play online games? Well for starters, I'd like to point out; I have actually met a couple of 13 year old kids who have shown the proper amount of maturity for online games. Not to say this applies to everyone, however, but younger kids in general. Back on topic, the world of online gaming (PC & Console) can be a bit vulgar for those of a younger age; this can be for multiple reasons:​
​
- Offensive content​
- "Trolling" Teenagers​
- Cyber Bullying​
- Scamming​
​
This list can really go on for quite some time! Recently, one of the biggest issues I have seen is trolling; although it may be funny for one person, the other may not consider a joke whatsoever. I have actually witnessed a younger fellow who started sobbing on Xbox Live, because of some other members who were trolling him. Sure, trolling can be funny, but only to a certain extent. On another subject, let's talk about scamming. At a younger age, a person can be manipulated much more easily, than that of someone with a little more knowledge. When you have a younger person on an online gaming network, all it takes is one dishonest person to deceive them; typically it's not that hard.​
​
So there are two of the major flaws in breaking the age limits. There are other issues such as; someone of an older age harassing a younger fellow because of his voice. Often times, younger players are made fun of for not having a "deep" voice. In order to prevent this (and a few other issues), Microsoft offers the security feature to disable public speaking online (in which you must add a player before being able to talk to them). Not many people use this feature, and again, ignore all the flaws.​
​
Now I realize, typically, kids do not believe offensive content should be an issue. At any age, we feel we are "mature" enough to handle offensive content. The truth is; kids are not always mature enough for it, no matter how confident they are, it takes a certain level of maturity. An average kid will simply go repeat the offensive joke he heard online, or the inappropriate language. It's just not a good idea, and can end up with trouble at home & school. Also, a common saying; "If you do not know what it means, do not say it!". This really has nothing to do with maturity level, but repeating something that you do not understand can often times end badly.​
​
In a short conclusion, I do believe people should be more aware of these issues, and respect the age limits a little more. Of course it's not my decision to make if someone who is younger wants to play online games, but rather the guardian of said child. I believe anyone should take good care to review the pros and cons of allowing their child online before doing so.​
​
So now you've heard my opinion, what do you guys think? Thanks so much for reading my article, take care now.​
​
Image Source(s):​
M Logo - http://www.blogcdn.com/www.joystiq.com/media/2006/08/ratedm.jpg​
Age Photo - http://i1.ytimg.com/vi/L7EUFMi2LOU/hqdefault.jpg​
Cover Photo - http://imgur.com/R3XETXK​