Games for Windows Live will not be shutting down

Microsoft formally announced that the once popular PC gaming client, "Games for Windows Live" will indeed, not be shutting down on July 1st. In August 2013, the support page for "Age Of Empires Online" was quickly taken down after Microsoft accidentally revealed their plans too discontinue their gaming service. 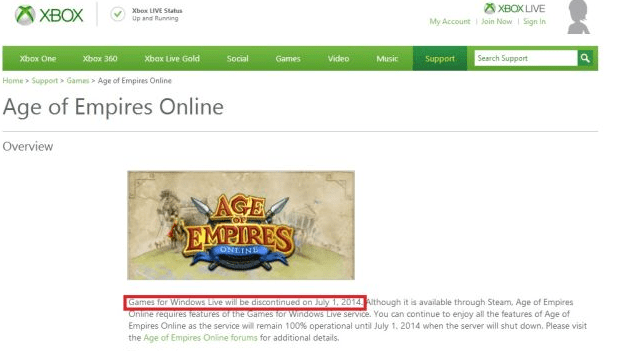 For those of you who may not know, Games for Windows Live is the equivalent of the popular gaming client Steam. It has been around ever since 2007 housing some of the best selling games like Halo 2 and Fable 3. GFWL offered voice chat and achievment unlocks and even supported cross platform gaming between the PC and Xbox 360 for a few of its titles. Its success was short lived because Steam started to grow bigger and bigger and drew in more users due to its incredible sales and wide variety of games.

After hearing this back in August, Many developers quickly decided to stop developing games for GFWL and instead switch over to Steamworks which is run by Valve, to ensure that their games stay playable in case Microsoft ever decides to stop support. After the PC marketplace was shut down on August 22nd, developers for games such as "Dirt 3" and "Batman Arkham Origins" switched over to Steamworks to handle the achievements and multiplayer. "Twisted Pixel" which was actually a Microsoft owned studio also switched over to Steamworks after hearing the bad news.

Phil Spencer, The head of the Xbox division and Microsoft Studio's, continually addressed earlier this month that Microsoft does not plan to go up directly against Steam. He also said "We are continuing to support the Games for Windows Live service. As previously announced, as part of the retirement of Microsoft Points the Xbox.com PC marketplace was closed. Although customers are unable to purchase new games from the marketplace or receive title updates, they can continue to enjoy previously purchased content by downloading them through the Games for Windows Live client as usual. We remain committed to investing in PC gaming in the years ahead, and look forward to sharing more in the future."

What do you guys think? Do you think it was a smart move to continue Games for Windows Live even though Steam is now more popular?