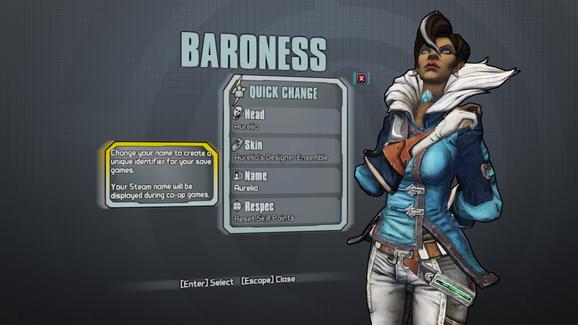 Earlier today the third title of the hit series, Borderlands, hit shelves in North America. Borderlands: The Pre-Sequel has had many fans excited with new information hitting the web as the release date got closer and closer. Even though the game is now available to play, there is still a lot left to be discovered within the world of Elpis. A Se7enSins user by the name of TechnoJacker has discovered some new information about the future DLC and has uncovered the new character in the game’s files.

By opting-in to the beta version of the game on Steam, TechnoJacker was able to take a peek at the files of the upcoming DLC (codenamed "Crocus"). Within these files he was able to get the name and some information of the new character, the Baroness. As of now, the only information we know for sure is that the Baroness’ default name is Aurelia.

Judging from the picture, one could assume that Aurelia is a “fashionista” and wears very high-end clothing. Additionally, baroness is a European title given to women that have gained honor through their heredity. Aurelia is also a common name among queens, further implying she is of royalty to some extent. It should be noted that right now this is just my own speculation based on her appearance and name, and the only things we are sure of is her name.

Currently TechnoJacker is working on a way to play as Aurelia in the game, but hasn’t been able to unlock her yet. There have been ways in past games to play as characters that are locked, but this method is no longer working in The Pre-Sequel, so a new bypass needs to be discovered.

Stay tuned for more information, as this article will get updated when or if we learn more about this DLC. You can check out the original find here.
About author