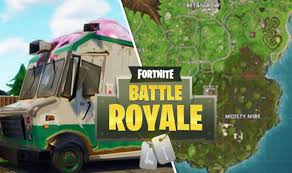 Season 4 of Fortnite: Battle Royale rolls on with a new set of challenges for Battle Pass owners to complete. Week 4's challenges are now live on PS4, Xbox One, PC, and iOS, and this time around, they're made up primarily of straightforward tasks, although a few may still pose a bit of trouble. Here's how to complete all of Week 4's objectives.

As usual, there are seven new challenges to complete, most of which are fairly self-explanatory. On the easier end of the spectrum, one challenge tasks you with dealing damage with Assault Rifles, which is simply a matter of finding the right weapon and using it to inflict a specific amount of damage to other players.

Some of the other new challenges are a bit more dependent on luck. One tasks you with visiting the centre of three Storm Circles in a single match, while another has you searching seven Ammo Boxes in a match. There's also a challenge that requires you to search seven chests in Wailing Woods, but fortunately, this one doesn't have to be completed in a single round.

The one that will likely prove to be the trickiest is a Hard-difficulty challenge that cryptically says to search between a bench, Ice Cream Truck, and Helicopter. Both benches and Ice Cream Trucks are fairly common on the map, so your biggest clue is the helicopter. As you can see in our map below, the challenge leads you to the centre of Moisty Mire, under a big tree near the area's movie set. Simply head to that location and you'll be able to pick up a Battle Star.

The remaining two challenges are likewise labelled Hard. The first tasks you with eliminating one opponent using a Trap, while the second has you eliminating three players in Snobby Shores. Your best bet for completing each is to attempt the challenges in a Solo playlist, where you don't need to worry about opponents being revived by teammates. The reward for clearing each Hard challenge is 10 Battle Stars.

Completing weekly challenges helps you rank up your Battle Pass, which in turn unlocks new skins and cosmetics. As always, the weekly challenges will be available for the remainder of Season 4, so you have until the season ends to complete them and unlock rewards.

However, since Season 4 kicked off, Epic has offered an incentive to complete each weekly challenge as quickly as you can. Clearing all the challenges within a given week completes a new Blockbuster challenge, which rewards you with a loading screen that points to the location of a free Battle Pass tier. You can get a full rundown on how to complete everything in our Season 4 challenge guide.