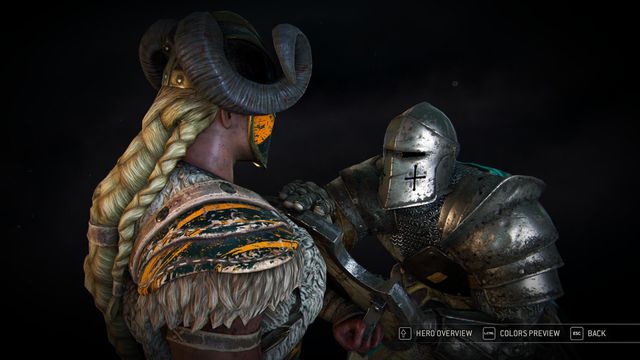 For Honor’s title update on Dec. 15 replaced a finishing animation, the removal of which caused a stir in the game’s community one month ago.

Part of the hack-and-slash fighting game’s appeal for players lies in equipping signature finishing blows for the different classes of combatants. One such execution, for the Valkyrie class of the Viking faction, is called “No Touching,” and was made available in November.

It was taken out of the game within an hour. An Ubisoft representative told Polygon that the move was inappropriate content that didn’t belong in the game. This is probably why:


​
Valkyrie spears her opponent and rips out the pike. The opponent stumbles forward and appears to grab the Valkyrie’s breasts as he stabilizes himself. The opponent, who can be any one of a number of classes across the game’s factions, shakes their head (apologetically?), and then Valkyrie knees them in the groin and shield bashes them. A divine lightning bolt finishes off their lifeless corpse.

As the video above shows, people noticed that the execution was unavailable for purchase (with in-game currency), despite still being in the store days after it was introduced. An Ubisoft community manager then said (on the game’s subreddit) that a new execution was coming, and that players who bought the original would have their steel (For Honor’s in-game currency) refunded.

Here’s the newest animation, as of Friday.


​
Valkyrie gets her shield up, the enemy braces himself on that, and the rest of the outcome is still the same, sans lightning.

For Honor’s official blog only describes the change as a “bug fix.” Threads sprouted up on the subreddit complaining of censorship, or claiming that the community was being infantilized over suggestive content by a game that celebrates extraordinarily violent deaths.

“Killing an unarmed person while they kneel hopelessly while your character laughs and slits their throat? That’s fine,” said one redditor. “Crushing someone’s ****ing skull using nothing but bare hands while they scream? That’s fine. Original No Touching execution? Oh no, that’s just to far.”

“And here I thought a French company wouldn't change something based on American values,” wryly said another player. “Guess I was wrong.”

One redditor, however, noted that even if the game carries a Mature rating from the ESRB, it does not have the “sexual themes” content descriptor. The “No Touching” animation, theoretically, could require a re-rating or a re-labeling, which wouldn’t change to whom it could be sold, but would be a headache for Ubisoft.

An Ubisoft representative said that ESRB rating concerns played no role in the animation’s removal, however. Instead, the reason was because it was not meant to be included in the game in the first place.

Apparently the original execution that published on Nov. 9 was an earlier file that accidentally made it into For Honor. Its replacement was supposed to have been added to the game that day. But a timestamping error involving Daylight Saving Time somehow uploaded the groping animation instead of the one with the shield.