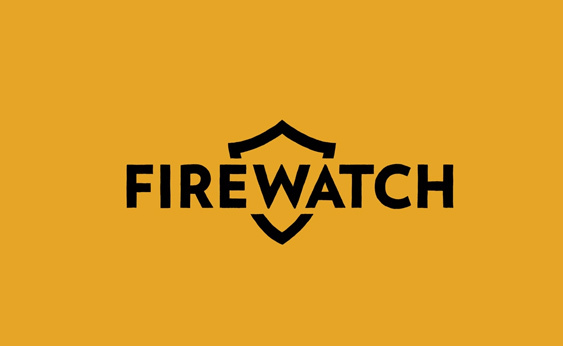 I’m not going to lie; I’ve been extremely excited to get my hands on Firewatch ever since the release date was first announced. Even after watching the simple little trailer, I knew I was hooked. Fast-forward a few months and here we are, Firewatch is everything I, and many others, had hoped for it to be.

Getting started here, let’s jump straight into what Firewatch is all about. Firewatch is a first person adventure game with some drama and thriller aspects thrown into the mix. You play as a man named Henry, a fire lookout stationed in the remote Shoshone National Forest. The majority of your interactions happen between you and your boss Delilah. Even with that fact, you’re basically isolated for the entire game as your interactions between Delilah are generally all through a radio system.

One particular event in the storyline sparks the entire storyline, throwing you right into a thrilling adventure. Strange things begin to happen in the forest after that event, and in typical adventure game style, Henry is assigned the task of investigating all of these strange occurrences. This ultimately leads you into a tight knit conspiracy, but I’ll avoid spoiling anything from the main storyline.

If any of you have seen the trailer, then you’d know just how gigantic and daunting the forest looks. Firewatch lets you explore lots of areas of the forest, so you’ll always have a chance to look at all those beautiful trees. Speaking of those beautiful trees, the beauty of this game stretches far past just those trees. The style of art the developers decided to go with is simply gorgeous when combined with the natural beauty of a large, open world rural landscape. During the day, the bright colours of the forest strike you with a bold and fierce look, making you feel just how isolated you are. This is accomplished even better when the game shifts to the night time because of how the darker orange colour sets the tone for the late afternoon, and how the dark colours leave you feeling too scared to turn around to look behind you at night. The shadows and textures of this game also help to make the gamer feel how Henry is feeling. There is even a camera which you can use in game to take pictures of the beautiful landscape that is the Shoshone National Forest. All in all, the bright and bold colours blend very well together to offer the player a rich and immersive experience. 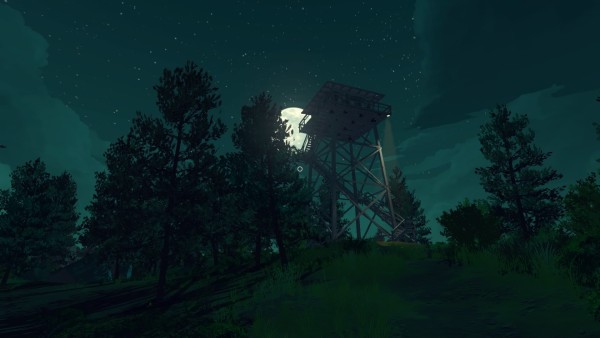 Don’t think of Firewatch as a one trick pony though, as the sounds and dialogue in this game are top notch for a smaller title like Firewatch. Players are given the opportunity to mold Henry into who they want him to be by picking and choosing what Henry will say in each interaction with Delilah and other humans, as the situation arises. You can lead Henry on to be a serious and practical person who lacks a sense of humour, or you can be a funny, flirty type of guy who is very charismatic. To go along with a gameplay element like that, the dialogue in the game would have to be performed extremely well, and I am happy to say that the dialogue in Firewatch is nothing less than perfect. Conversations flow very naturally between you and Delilah, none of it seems forced at all. The tone of the conversation is also like I said earlier, totally in your control. This is something I initially picked up when they released the trailer a few months back. The music and other sounds in this game are also great. Various types of instrumentals begin to play based on your situation and setting, so for example, a faster paced and eerie tone would play during night, really working well with the visuals to give the player an immersive experience.

Now let’s discuss the actual gameplay. People often joke about how certain games are just becoming walking simulators, since all you do is walk around from place to place. Firewatch does involve a lot of walking, but it’s what you’d expect if you’re a ranger in a humongous forest. You have a few tools at your disposal at all times which include your map and compass. At the beginning, you’ll probably be very confused as to where you’re supposed to go, so these tools will prove to be useful. I must say that the game is a lot more fun when you disregard these tools all together, since it feels more like an adventure. This requires you to be fully aware of your surroundings. Me and Chazay were speaking, and one point that he brought up was very relatable for me. Even though the game is situated in a huge forest in the middle of nowhere, the game is just so on rails and linear. Many sections of the map are blocked off via invisible barriers or random vegetation that you cannot tread through. Paths are clearly defined by a rough walkway and there are usually multiple ways to get to a certain location, but the world wasn’t as open as I had expected it to be. Don’t let this give you the wrong impression though, even though the game is very linear, you’ll find yourself becoming lost very often, forcing you to refer back to your map. Speaking of the map, there are various supply drops located around the forest which will present themselves to you as you progress through the game. You have the chance to update your map once you reach these drops, and that outlines more pathways and areas which you can explore on your map. As you move around the map, you’ll find yourself having to jump over and maneuver around different objects very frequently. You often have to use various supplies such as ropes to make your way around different terrains and the game in general will require you to use some basic problem solving skills. You are able to interact with some of your surroundings by examining different things, reading objects and so on. In general, you’re free to do a lot in the game, but you’re not able to steer as far off course as you would have expected to.

From a technical standpoint, the game ran fairly well on my PC. I ran it at 1080p at medium to high settings and I got around 40-60 FPS. I experienced a few frame jitters and drops here and there but nothing bad enough to ruin the entire overall experience. I played throughout the game with my keyboard and mouse and the controls were responsive for the most part. Accessing my map and compass was challenging at times since those keys were located away from the WASD keys, but some button remapping should be able to fix that right away.

Now for my thoughts on the game, I would definitely recommend it to most people. The story had me guessing as to what would happen next all throughout the game, but I have to admit that the ending while wrapping things up quite nicely, had me felt like the game was lacking something. I would definitely say it’s worth picking up on your PC or PS4 if you’re looking for a. intriguing little game to play over a weekend. The replay value is definitely there, as you can switch up the dialogue as much as you want, leaving the game feeling fresh. I can honestly see myself replaying this game once every year, simply because of how attached and mesmerized I have become with the Shoshone National Forest, it really is a great big national treasure with a wide window for exploration and adventure.
About author