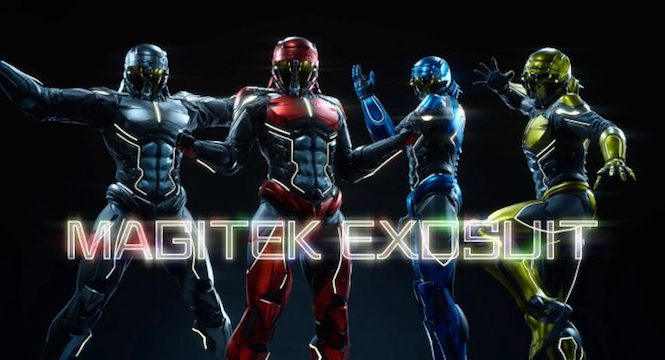 ​
The July update for Final Fantasy XV is now live. This month's patch adds the long awaited set of Power Rangers-like combat suits to the game and gives players another chance to participate in a limited-time in-game event.

Starting today, players will finally be able to get their hands on the Magitek Exosuits, a special set of armor for Noctis and his friends. Donning the Exosuits makes the party invincible for a full 30 minutes, though the suits can only be used once per day. The Magitek Exosuits were originally intended to be released as part of the game's paid DLC Booster Pack this past February; however, Square Enix delayed the costumes due to their similarities to the ones worn by the Power Rangers in the recent reboot film. To make up for the delay, the publisher is offering the armor for free to all players. The Magitek Exosuits were also redesigned to further differentiate them from the Power Rangers; you can see a comparison of the old and new designs below.

In addition to the Magitek Exosuits, this month's update adds a new Cross Chain system to the game, as well as an additional quest to undertake. The biggest feature from the update, however, is the return of the Moogle Chocobo Carnival. This limited-time event originally ran back in February and features special carnival-themed games, items, and quests to experience. As before, however, players will need to have either the Holiday Pack or Holiday Pack+ DLC installed to participate in the event. The former pack is free to all players, while the latter is only available to those who purchased the game's Season Pass. Square Enix says the Moogle Chocobo Carnival will run until "late September."

Final Fantasy XV players still have more content to look forward to in the near future. Square Enix will soon be hosting a closed beta for the game's Comrades expansion. Those who purchased the Final Fantasy XV Season Pass and have either a PS Plus or Xbox Live Gold membership will be able to try a sampling of the upcoming multiplayer expansion from August 3-8. A third DLC episode is also slated to arrive this December and will revolve around Ignis.