FBI Tries to Teach Awareness of Radicalism Through Gaming 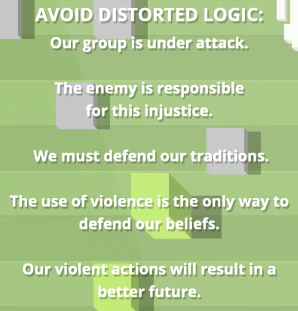 ​
The Federal Bureau of Investigation recently presented a new educational site for teenagers with the intention of teaching them about the dangers of extremism. The website discusses what extremism is, how it can become violent, and attempts to point out warning signs of impending radicalization in a person's mindset. There is even a video game that tries to convey this message. With extremist groups now easily able to recruit members via social media, this idea is nothing short of spectacular.

Budding teenage minds are impressionable, and exploiting these confused, trusting minds has been a long-time strategy for some extremist groups. Presenting an argument in the rational middle of the spectrum in the very popular medium of a video game is a brilliant idea, and it has the potential to resonate with teenagers and stick with them to help them avoid falling into an extreme.

Slippery Slope, however, is not at all how this should have been executed.

The game consists of a goat avoiding blocks. Yes, that's the end of my synopsis. The goat is controlled with the arrow keys, and the objective is to cross the finish line while avoiding blocks. The only interactive aspect of the game, the movement, is unbelievably terrible. Barely tapping on one of the arrow keys results in the goat moving all the way to whatever end of the screen you told him to move in. Perhaps this choice was intentional; perhaps this inexcusable control system was implemented on purpose to show how easily one can be moved to extremism, just as how easily the goat can be moved from wall-to-wall.
Or perhaps this is simply a terrible game.

Gameplay mechanics aside, the FBI is attempting to caution the dangers of extremism to children by way of a very, very poorly made Flash game that doesn't even really correlate with the topic it's attempting to discuss, unless the game is heavily metaphorical. There are checkpoints that present the player with "distorted logic," which consists of statements such as, "We must defend our traditions," and "The use of violence is the only way to defend our beliefs." This implementation paints the game in a light that makes it seem more like a slideshow and less like a video game. The theme of the website, "Don't be a puppet," is nowhere to be found in this game. I cannot, for the life of me, figure out how this game, besides the distorted logic screens, will help teenagers discover the dangers of extremism.

This is simply a case of adults pandering towards children and simplifying their minds. While teenage minds are typically impressionable, that does not mean that they are simple and small. A teenage mind has the capacity to hold more than Flappy Bird as Made by the FBI. Nobody will take the website's message with them, which is really unfortunate. It almost seems as though the FBI was trying harder to seem "hip" to teens than to relay an important lesson to them.

The FBI completely missed its demographic here. Is there a demographic with a game like this? I am not certain. I am certain, however, that this idea could be manifest into something far greater. This message could have been implemented into a full release of a brand new game. As a gamer, I don't mind being spoken to. What I mind is being beaten over the head with a message. If the FBI wants to use video games to try to get this message across to teenagers (which I absolutely think they should), they are going to have to try infinitely harder than this.

I understand that this is a newer project and this Flash game is, more or less, an easy target, but I can't help but feel that there was a squandered opportunity here. Video games are an artistic medium, and I'm not sure the FBI has caught onto that, because, with the right budget, they could have produced something so massive and so awe-inspiring, and instead they made a barely-functional Flash game. The untapped potential here is staggering. Some video games have better writing than some Hollywood productions, and a thought-provoking story about the horrors of becoming a radical could definitely find its way into the market.

Video game stories have the power to sway the player's emotions to places they didn't expect. I could play a game that conveys a subtle message about the dangers of extremism, and it could affect me profoundly. I could be awestruck and sit at my television for a few moments as the credits roll, my thoughts racing, unsure of what to make of what I just played. I could turn the game off, deeply moved by what just occurred, and go about the rest of the day with the message at the front of my mind. That thought could become an ideology that will remain with me for the rest of my life, and I will know for certain how dangerous falling into radicalism would be.
Or, I could play one game of Slippery Slope, forget about it in five minutes, and learn nothing.