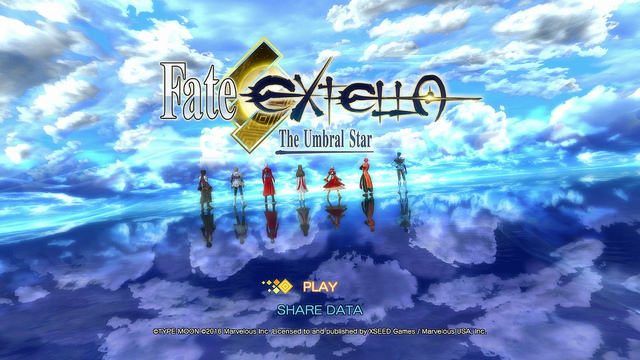 After about a year’s work on our end, it’s great to see the launch of Fate/Extella: The Umbral Star just around the corner. If you’re seeing the game for the first time in this blog, it’s a battlefield action game set in the Fate universe, where the spirits of historical and mythical figures come together to fight. If you’ve ever wondered whether Alexander the Great could beat Lu Bu, or how a trickster fox spirit might fare against Medusa, Fate will be right up your alley.

As the localizers and North American publishers, we’ve spent about the last ten months working through the lengthy script. Fate/Extella has a unique and inventive story, and it’s been our job to make sure that story is as clear and as accurate to the Japanese as it is engaging to an English-speaking audience.

It’s been a challenge sometimes. The series’ main Japanese author, Kinoko Nasu, likes to pack his prose with wordplay, literary references, and a kind of free-form poetry. Keeping true to that style, while also making the English text both clear and in character, hasn’t always been easy. But now we’re ready to roll the game out, and while there will always be bits and pieces we’d like to go back and keep polishing, we hope everyone will enjoy what we’ve been working on.

Now’s a good time to look back on some of the more memorable moments and steps along the way. Here below, please enjoy our top five:

5.) We’ve talked before about the linguistic puzzles of Tamamo no Mae, one of the main characters, but those aren’t her only quirks. One of the most multifaceted characters in an already-colorful cast, Tamamo keeps everyone (including us) off guard with her unpredictable personality.

On the one hand, she loves to play the part of the doting wife to her player-character “husband,” but she also loves to play the villain, the benevolent ruler, the divine mystic, and even — just once, and just because she likes you — the giggling high school girl. For us, the trick to writing each of those different “voices,” while still making them all sound like the same person playing different roles, was to remember that she always has the same goals and desires, and is just expressing them differently through those various personas.

4.) The game’s hidden character, Artoria, has the most obscure unlock requirements some of us have ever seen, so much so that we’ve had to put together a walkthrough. (Feel free to avoid the walkthrough if you’d rather try to find her yourself, but if you do, it’ll probably be through sheer luck.)


3.) At first glance, the characters in Fate don’t always resemble their namesakes. Nero Claudius is female, Elizabeth Bathory is a half-dragon J-pop idol (in training, at least), and Thomas Edison (not appearing in this game, but elsewhere in Fate lore) is a lion-man who’s also a former President of the United States.

But as the game unfolds, some of the characters subtly start to show why those choices were made and how they relate to the story. Nero, for example, is a passionate lover of art and beauty, and like most Roman emperors, likens herself to a deity, in her case Venus. One of her main adversaries, Altera, has little or no inner passion, and also has a history with the god Mars, and so the two of them clash on various levels, both narratively and thematically. More details would give too much away, but the upshot is that these unique takes on the characters gave us the opportunity, as translators and editors, to get inside the characters’ heads from a different angle.

Incidentally, and on a personal note, if we do another Fate game, I want one of the LE goods to be a dollar with lion-man Edison’s face on it.

​
2.) We always start a new localization project by familiarizing ourselves with the lore and characters of the game’s world. As part of that, we researched the history of the historical and mythical figures the game’s characters are based on. (For completeness sake, we also looked up some of the other Fate characters who don’t appear in Extella. Pro tip: do not look up the history of Gilles de Rais.) Among other factoids, we learned that Emperor Nero was so convinced of his own artistic genius that he would lock audiences into his theater, forcing them to listen to his performances for hours at a stretch. You’ll see a bit of that in the game too, if you happen to ask Nero for a lullaby.

1.) Our friends at Aksys, whose office is down the street from ours, localized Fate/Extra back in the PSP days. While we were gathering reference material for Extella, we asked if they could share their material, and they graciously sent us copies of their script and notes. We didn’t always stick to those notes, but reading them gave us both raw information and insight as to how that information had been used before, both invaluable for our own work with the series. Thanks again, guys!

The game’s all set to launch on January 17 in North America. On the physical side, we put together the Noble Phantasm Edition, for both PS4 and PS Vita, which comes with various LE goodies including a 24″ by 17″ cloth poster, a fully translated and hardcover version of the Japanese Materials Book, and a pack of sixteen 3″ by 5″ collectible cards depicting each of the game’s Servants.

Digitally, there’s a pre-order bundle available for the PS4 version, which comes with an exclusive Theme and the equally exclusive “Shackled Bride” outfit for Nero. (The outfit carries over to the PS Vita version if you buy the PS4 pre-order bundle.)

​
At launch day, and for the first two weeks after launch, the PS Vita version will come in an “Early Bird” bundle, which will include the PS Vita equivalent of that exclusive Theme, as well as Gilgamesh’s exclusive “Cold-Blooded Warden” outfit (which, once obtained as part of that bundle, carries over to the PS4 version).

But our work isn’t quite done yet; we’re still finishing up on various Themes, avatars, and costumes. So I’ll get back to that for now. Thanks for reading, and if you have any questions, comment away.