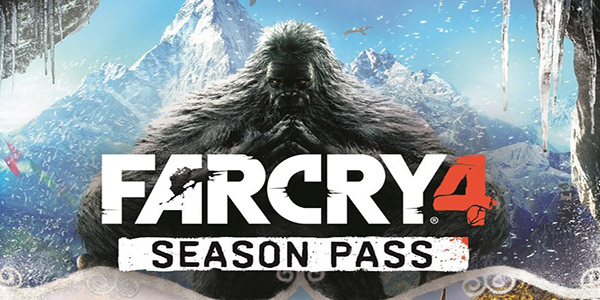 Yesterday, Ubisoft released the details on the Season Pass for their next installment in the Far Cry series. Not knowing what to expect, Ubisoft announced one of the strangest things they could put into DLC; Yetis. Along with these Himalayan beasts, pass owners will be able play with friends in co-op missions that range from prison breaks to wild hunt missions. And if that doesn't intrigue you, the pass will include access to a brand new player-versus-player mode.

The first part of the DLC included in the season pass is called The Syringe and will be available at launch. Players must evade the forces of Pagan Min so that a rare and powerful recipe does not fall into their hands. If captured, Pagan Min will use the recipe to destroy the rebel forces. In Escape from Durgesh Prison, team up with a friend and play as Ajay and Hurk where you will need to escape from prison after being captured and tortured. With the third DLC, Hurk Deluxe Pack, players will have access to five different missions that are playable in both single player and co-op. Some of the missions will include Yak Farm, Hurk's Redemption and Blood Ruby alongside a new arsenal of weapons a harpoon gun for Hurk.

Valley of the Yetis. As to why there are Yetis in the game, who cares. It's Yetis! The expansion pack starts when Ajay's helicopter crashed somewhere on the Himalayan ridge where he discovers that he is not alone. In order to survive, you must explore the harsh mountains for tools that will protect your camp at night from the mysterious beasts that wander the night. And if that that doesn't intrigue you, you can always play the new PvP mode that will be made available with Overrun expansion. In this game mode, you will team up with either Rakshasa or Golden Path in an attempt to conquer territory around Kyrat while stopping the enemy from taking the already captured areas.

Though there isn't an announced price, the Season Pass will be 20% cheaper than buying the DLC individually. It will also be available for those who have purchased the Far Cry 4 Gold Edition which has a set price of $90.