Fans of Halo: MCC Promise to Boycott Guardians Until MCC is "Fixed"

​
Halo 5: Guardians is scheduled to release sometime in 2015. However, players of Halo: The Master Chief Collection, which was released on November 11th of last year, believe that the developers at 343 Industries have some work to do before they should get any money from Halo 5: Guardians.

In December of 2014, Bonnie Ross, who is the head of 343 Industries, issued a public statement about the game's issues. This was followed up with rewards to 'loyal' fans and more promises regarding The Master Chief Collection:

"Last month, I promised the Halo and Xbox community that addressing the matchmaking issues and other bugs impacting players’ experience with Halo: The Master Chief Collection was our #1 priority. We’ve been working around the clock deploying weekly content updates and numerous server-side adjustments that have shown good results and we’re encouraged by the feedback we’re hearing from you."

Since the statement was made a little over a month after launch, most fans were understanding and forgiving. However, currently, in 2015, fans are no longer waiting patiently. All over the internet, an image is being spread around making specific demands of not only the developers at 343 Industries, but also the publisher, Microsoft Studios. Players who are boycotting claim that if their demands are not met, they will not spend a penny on Guardians. This idea as well as the image are being recognized on many websites, including reddit. 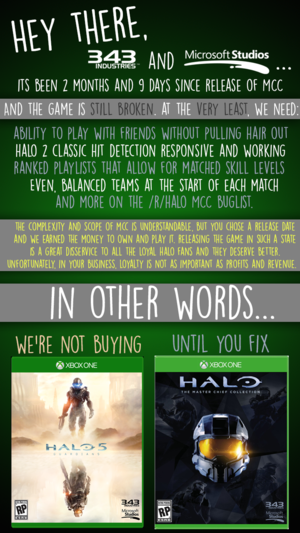 The purpose of such a boycott, like many boycotts, is not only to get the attention of 343 Industries, but also the attention of other players. Currently on Amazon, Halo: The Master Chief Collection has mostly 1 star reviews, but with 5 star reviews currently closing in at 307 behind them. This means that many Halo: The Master Chief Collection players are happy with the game, and players participating in the boycott want to point the flaws of the game out to these players in order to obtain a larger following.

Personally, I do not think this will make a difference in 343 Industries' work ethic. Since launch, the developers have been claiming the issues with Halo: The Master Chief Collection to be their top priority. Therefore, these demands will only be repetitive to what they are already trying to accomplish.

What are your thoughts? I know many Se7ensins members have experienced frustration with this game. Do you still have patience with 343 Industries? Will you be boycotting Guardians?