With all the commotion regarding the Fallout 4 hoax site this should give fans of the popular post-apocalyptic open world RPG series a slight sense of hope. According to Kotaku, documents have been leaked that confirm that the game is in development and is set to take place in Boston. The documents include scripts, character descriptions among other sensitive pieces of information. All documents shown are confirmed to be real and part of a project codenamed "The Institute".


This is huge news, as this is the first 'official' confirmation that this game even exists. The documents state that the game begins with the player narrating the opening sequence. 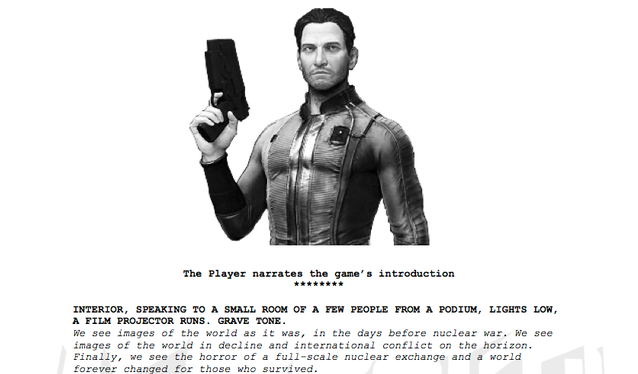 
"War. War never changes.​
​
In the year 1945, my great great-grandfather, serving in the Army, wondered when he'd get to go home to his wife and the son he'd never seen. He got his wish when the U.S. ended World War II by dropping atomic bombs on Hiroshima and Nagasaki.​
​
The world awaited Armageddon. Instead, something miraculous happened: we began to use atomic energy not as a weapon, but as a nearly limitless source of power. People enjoyed luxuries once thought the realm of science fiction.​
​
But then, in the 21st century, people awoke from the American Dream. Years of consumption led to shortages of every major resource. The entire world unraveled.​
​
We now stand on the bring of total war - and I am afraid. For myself, for my wife, for my infant son. Because if my time in the Army taught me one thing ...​
​
It's that war.. War never changes."​
​

Similar intros were used in previous installments in the series, however they were not narrated by the player. Whether or not this will be the official intro has yet to be determined. The game is still in development, so I would expect to see some changes. 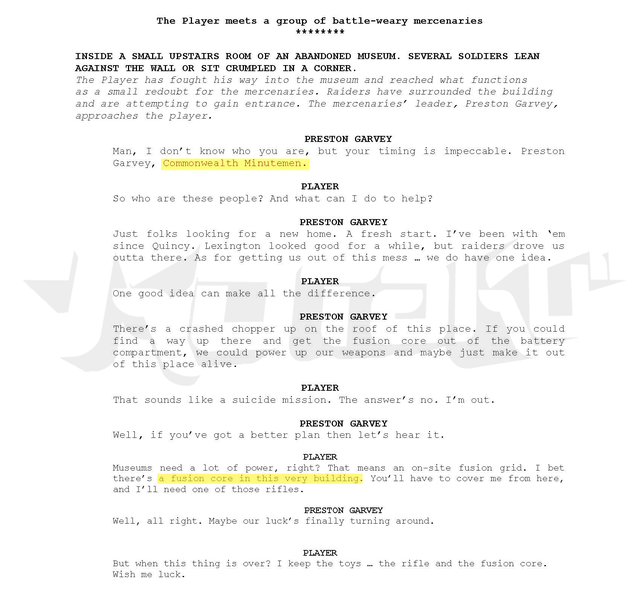 The two highlighted sentences hint at the games location possibly being Boston.

Other documents describe a mission set in the Institute—Fallout's post-apocalyptic version of MIT—and references to other Fallout locations that have been mentioned but never shown in other games, like the Commonwealth, which comprises what's left of Massachusetts.
Click to expand...

There is also some other information contained in the leak pages. There is a character named Travis Miles and apparently he is a radio DJ in the wasteland. Another character shown in the documents, an engineer named Sturges, is described as a cross between Buddy Holly and Vin Diesel.

I'm personally excited to see that this game is actually in the works and some physical evidence has been found! What does our community think of this news? Post below.

If you'd like to give the original article a read, it can be found here.