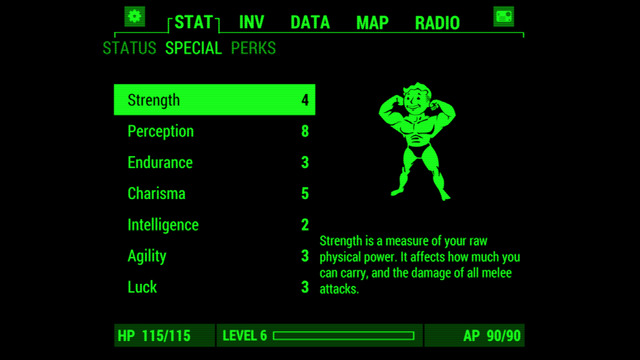 ​
The countdown for Fallout 4 is nearing its end as November 10th is now just five days away. Fans of the series and those who have been following the game should already be aware of the Fallout 4 Pip-Boy Edition, which comes with the base game and an app on your mobile device. Your mobile device then fits inside of a Pip-Boy glove that comes with this unique version of the game. The app has been publicly released ahead of time and although certain features such as the radio are not yet implemented, those who download the app can still access the stat and character screens to get a sense of what else will be included in the game.

The Fallout 4 Pip-Boy Edition was intended to fully simulate what it would be like to own a Pip-Boy in the Fallout universe. Those who managed to get their hands on the limited edition of the game while it was available will be able to situate their mobile device with the app into the Pip-Boy that is to be mounted on the player's wrist. In the Fallout games, the player accesses their character information, inventory, map, and quests through the Pip-Boy and the Fallout 4 Pip-Boy Edition is designed solely to imitate this, only outside of the game.

Using this app and the Fallout 4 Build Planner developed by RPG Gaming, fans eagerly awaiting the release of Fallout 4 have a way to pass the time in the coming days. The Pip-Boy app will be in "view mode" but once the game is officially released, you will be able to sync it up to your characters in-game to keep track of their stats, inventories, and missions. For now, you'll have to settle for the holotape games that have been made available in the app.

With Fallout 4 so close to its release, will this app and the character planner be enough to sate your desire to finally play the next entry in the series? Five days isn't that long of a wait and these latest teasers ought to keep Fallout fans satisfied until the game releases on November 10th.