Fallout 4 DLC and Game Size on Xbox One 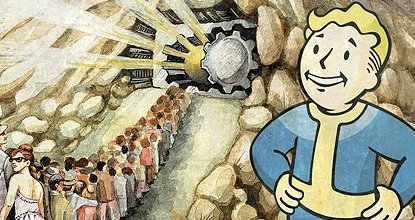 ​
Over the past few days, Fallout developers Bethesda Game Studios have informed fans about the upcoming RPG with news of the estimated file size for Xbox One as well as the release dates of future downloadable content. Fallout 4 has been confirmed to hold over 100,000 lines of dialogue recorded and over 400 hours of gameplay, according to the developers. These numbers add up to be a huge amount of space taken on a gamer's hard drive, which can be seen as 28.12GB on the Xbox Marketplace. Some have speculated that the number seems to be low when compared to the amount of content available in the game, but it is still substantially larger than previous games released by Bethesda, such as Skyrim which was just under 4GB upon its release. The seemingly low file size can likely be explained by file compression. The file size for PC and PS4 users has not yet been affirmed, but it will likely be a similar file size for PS4 users.

PS4 owners will be ecstatic to know that Bethesda will not be releasing additional content at later dates for their console. When Fallout 3 was getting DLC releases, the expansions would not be available for PS3 owners for several months after PC and Xbox 360 gamers received them. Pete Hines, the head of Public Relations at Bethesda Softworks, announced via Twitter that Fallout 4 expansions and additional content would be getting a uniform console-wide release.


​
At the time of their delayed DLC releases to PS3 owners, Bethesda was met with severe backlash by their community. It soured the relationship between gamers and developers and dissuaded some from purchasing Fallout for the PS3. With this announcement, Bethesda hopes to make amends for PlayStation owners in the past and make sure that all gamers are able to enjoy Fallout 4 this time around.
About author

My grand total for file size when I had modded Skyrim was somewhere around 120GB, lol.

I'm saying like fallout 3. I know skyrim was big.

Skyrim was the smallest, Fallout 3 was the largest.