Experience True Teamwork in Push Me Pull You 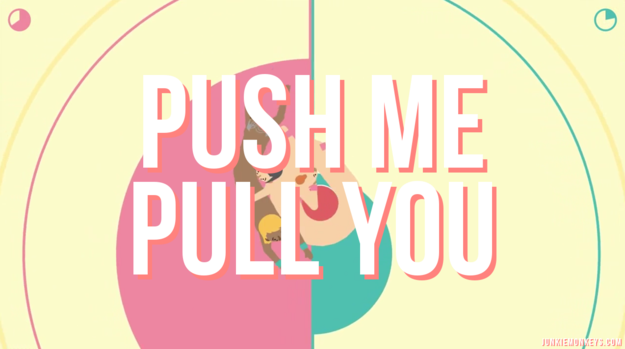 Coming soon to PlayStation 4 is Push Me Pull You, a small multiplayer game created by a team of developers at House House. The game has been in progress since 2013 and by next year it will finally be released to the world. The game will pit two players against two other players in co-op style gameplay that literally forces players to work together. In Push Me Pull You, you’re literally conjoined to the other player on your team. With most multiplayer games promoting teamwork as the key to victory, it’ll be interesting to see what happens in a game that forces it.

Utilizing a smooth, physics-based movement system, players in Push Me Pull You will need to work as a team to use their elongated body to make sure the ball is under their control. The body the players will share is flexible, and can grow, shrink, stretch and more. Keeping control of the ball will not be easy. Players will need to use their body to do things like wrapping themselves around the ball to prevent the enemy from getting it, forming a scoop to carry the ball, or using their body to push the ball further away from their opponents. Only the players who are good with working together and have planned out their strategies before playing will claim an easy victory. In most games, some players usually want to run off and do their own thing instead of being a team player.

In Push Me Pull You, character creation will be available, it seems to be strictly limited to the two heads on each end of the body. Alternative gameplay modes will also be available. One other game mode, Knockout, will have each player defend a ball that was assigned to their team. The main goal of Knockout is to bump the enemy team’s ball out of the arena while assuring the safety of your own team’s ball. The area you’ll be competing in will feature different secrets for players to uncover during matches. You’ll be able to have fun with the in-game physics during matches. Try not to slip up and get sidetracked, otherwise the enemy might steal the ball from right under your noses. The game truly brings a unique gaming experience every gamer should at least try once. Make sure you check the game out once it releases!

Push Me Pull You hasn't had its exact release date revealed yet, but it's confirmed to come in early 2016 on PlayStation 4, Windows, Mac and Linux.

Push Me Pull You
PlayStation Blog