Many, many years ago (on the 20th of September 1984 to be exact), game developers David Braben and Ian Bell brought home video games to a whole new dimension, literally, with their game Elite. Many older gamers believe that Elite's advanced engine, 3D graphics and open-ended playing field revolutionized gaming, and allowed for an entirely new vision of how games can be created and played to be born, alongside making a permanent name for itself in many people's hearts and gaming history.

The main goal for players in this space-age, ship-piloting simulator was to work their way up the combat ladder to the hailed heights of "Elite", which made it a fitting title for the game. Not only was combat a large part of it, an in-game economy and trading mechanics added extra, and much deeper elements to the game. That's not all, as there were eight different galaxies to explore, each with 256 planets to visit.

Since the initial release of Elite back in 1984, there have been two official sequels to the game: Frontier: Elite II (1993) and Frontier: First Encounters (1995). In 1998 the idea of creating Elite: Dangerous was born. In late 2012 it was successfully crowdfunded on Kickstarter.

David Braben himself is back in on the development of Elite: Dangerous, and has described it as "in some ways a mix of the original Elite and the sequels Frontier: Elite II and Frontier: First Encounters". Like it's predecessors, it features a large, vast, open galaxy for players to explore, which is a 1:1 scale galaxy based on the Milky Way. Developers Frontier Developments have also kept the trading and economics mechanics in the game, this time making them deeper than before. Elite: Dangerous is made to be an MMO, but it does also have a single player experience. 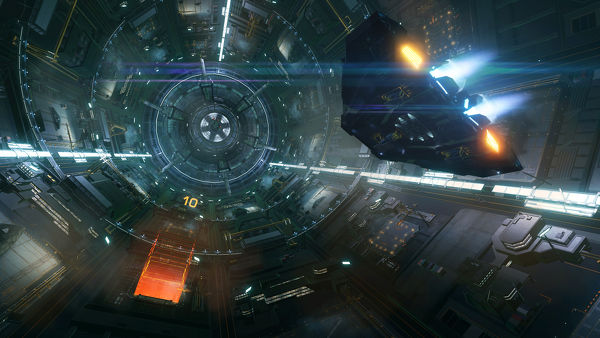 A small example of the trading system would be buying fish from one space station for around 500 credits, travelling x amount of lightyears to another space station, and then selling it for 750 credits, which would make 250 credits profit per fish. When you first start the game you have a small ship and 100 credits, so building up from that will take time and effort. Below is a video by YouTuber "Squirrel" , giving a demonstration of some things that you can expect to be doing in Elite: Dangerous. (This video is fairly old now).


​
This game definitely caters for those of us who are amused by the little things. Much like the old Elite game, you must request docking permission from the space station before you are allowed to enter, and you are given 10 minutes to get inside, land, conduct your business, and then leave again. But be careful, you might end up colliding with another player who is entering the station. There are also voice activated controls for actions such as rerouting power to the engines or guns. Don't expect the small details to stop there, you are also able to move your head from left to right and examine details about your ship, your ships' settings, or another ships' settings after scanning them.

Do you like exploring open worlds (or in this case, galaxies)? Well, if so, you're in luck! Much unlike the old games, Elite: Dangerous boasts a map on a scale I personally have never before seen. You can visit any one of four-hundred-billion (400,000,000,000) star systems. Each star system contains a mix of planets, moons, asteroid belts, rings, comets or cosmological marvels just waiting to be discovered.

Elite: Dangerous officially releases on December 16th for PC, and it will be £35 for UK, and $54 for US. For those wondering, Elite: Dangerous will have full support for Oculus Rift.

What are your thoughts on this blast from the past, brought back to life?
Will you be picking up Elite: Dangerous on the 16th?
How will you make your money? Through honest trading, or through the Black Market?