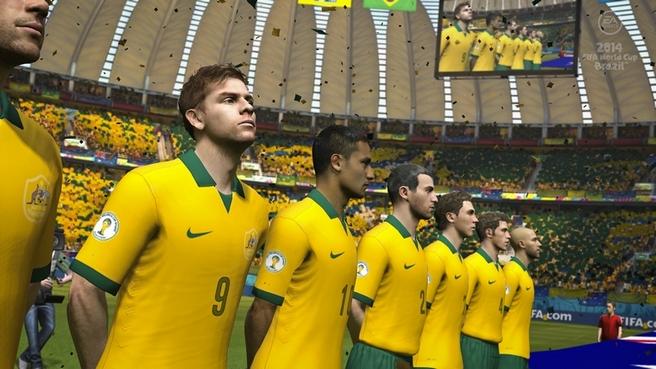 With the World Cup hosted in Brazil slowly creeping up on avid football fans, what better time for EA to bring out a game in which enables fans and gamers to participate in the virtual tournament, allowing you to build your national team and rise through the ranks to become the champions. The game is to release on April 15th on current gen consoles meaning consumers will have the chance to manage their supporting country and possibly win the trophy two months before the actual event begins.

The common consensus around previous World Cup games created by EA is generally based around the FIFA franchise, meaning most of the gameplay, controls and experience are shared throughout both games, however, EA have planned not to follow in FIFA 14's footsteps this year and instead to create a whole new experience for gamers and sports fans to indulge on. On March 5th, EA released information on the new game modes which would feature within the game, all of which seem to bring the game with a new found identity. The game modes which will feature on the game are:

Road To The World Cup
The most necessary game mode which will feature throughout the game, this allows users to manage any of the 203 available countries to glory by using the classic tournament tree. Each team will work their way from the knockout stages in which they will fight it out against 5 other teams, and if successful, will gradually work their way through the quarter and semi finals until their reach the climatic finale.

Road To Rio De Janeiro
Similar to the seasonal divisions found on the FIFA franchise, this game mode will be available online and gamers will start off at the stadium Arena da Amazônia and will gradually move to different stadiums once they win games. The whole meaning of this game mode is for gamers to win enough games so they are able to participate at the legendary stadium Estádio do Maracanã.

Captain Your Country
This epic game mode makes a mighty return back to the World Cup series, this allows gamers to choose a player from their respective country and work their way up to the starting eleven of the team whilst participating in friendly and competitive matches. Not only can you choose a real-life player, you can also create a future star for your country and again help them work their way up to becoming the best player of the tournament.

Story Of Finals
A brand new game mode which won't be accessible for gamers to playuntil the actual event begins. Story Of Finals concentrates on gamers being able to re-live the moments of each game played, from the knockout games all the way to the finale, gamers will be given the chance to replicate a specific score-line, change the course of a match or win a match without conceding a goal to replicate a specific score-line in return for XP which can be exchanged for special objects from the catalog.


Enough of the game modes, how about we look at the more important aspects of the game. EA have made a variety of key improvements to the current gameplay in which features on FIFA 14, allowing for a better experience and a more realistic feeling to be drawn from each game you play. EA have added 5 key improvements to the game, these are world class control, set piece tactics, over-the-back headers, new penalty kicks and Adidas ball physics.

World class control features two new mechanics which haven't featured in any previous FIFA game, these are response dribbling and pinpoint passing. The response dribbling enables the virtual footballer to control the ball more elegantly, allowing them to turn at every angle quickly and effectively without slowing down the player. Pinpoint passing are a series of new animations to create the passing techniques to become more realistic and precise, allowing for a better flow to the game.

An option which infuriates the typical FIFA gamer is not having enough options from set piece tactics, however the new set piece tactics which have been implemented within the game give the user a wider variety of movements and chances to score that last minute winner. From set pieces, teammates can make improved runs in order to try and score a goal, they are able to move from front to back post, the edge of the penalty area or even shielding the keeper from collecting the ball.

The over-the-back headers seem to be a nice little tweak to the system, allowing both defensive and attacking players to beat their opponent in one-on-one challenges in the air. The movement allows players to get above their opponent and win decisive clearances of knock-ons which could either save you from conceding or creating the perfect opportunity for you to score.

What's a worse feeling, losing a penalty shootout in the final of the World Cup, however at least you can go out in style with the new penalty kick movements which allow for a more improved penalty kick experience. Opponents and teammates will now be featured during the penalty kick to show their reactions to whether the goal goes in or whether the penalty is saved. The goalkeeper can also use different distractions in order to put the penalty taker under pressure.

An underrated aspect of previous FIFA games is the ball physics, well, how can you play football without a ball? EA have partnered up with Adidas in order to receive a more enhanced movement to the ball, from the swerve to the impact on the grass. These physics will ultimately create a more realistic experience for the gamer and could help to decide your fate whilst participating.

If you're interesting in seeing what the game looks like and how massively the experience has been altered, take a look at the trailer which was released earlier today.