EA is finally bringing the modern NHL into NHL 18 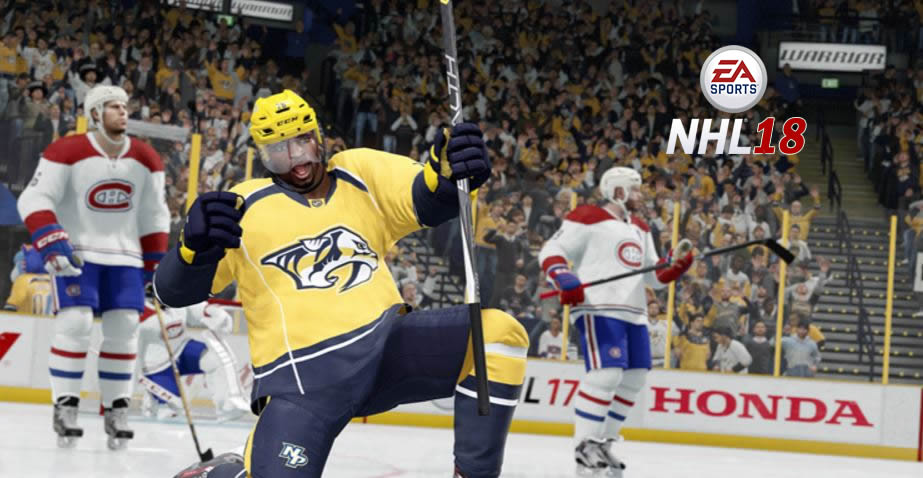 EA Sports has been using its famous slogan, “It’s in the game,” for more than two decades now, touting how realistic its games supposedly are. But while the games may get closer to real life every year, you’ve never quite been able to pull off a Datsyukian move in one of EA’s NHL titles. This is particularly frustrating these days — the real-life NHL is more about speed, skill and finesse than ever, and that fast-paced action, well, isn’t in the game.

EA Vancouver is hoping to change that this year in NHL 18, in an effort to allow players to do what the NHL’s brightest stars do every night on the ice. To hear the studio tell it, much of what’s new in NHL 18 was added to represent today’s league. Along with expanded control options on both offense and defense, the game will integrate three-on-three play through a new mode and the Vegas Golden Knights — the NHL’s newest team, which is announcing its initial roster tonight — through a major addition to the Franchise mode’s feature set.

It’s a crucial year for EA Vancouver, as the studio puts a new three-year plan for the NHL series into effect. The developers have clawed their way back from a , disastrous debut on current-generation consoles but they haven’t yet been able to go much further. Will they get there with NHL 18?


The new NHL is “all about the young stars,” said Sean Ramjagsingh, longtime lead producer on the NHL franchise at EA Vancouver, in a phone interview with Polygon last week. These days, teenage talents like the Edmonton Oilers’ Connor McDavid — who graces the cover of NHL 18 — and Auston Matthews of the Toronto Maple Leafs can come into the league and make an immediate impact as rookies.

These star players create space with incredible agility and slide past opponents with deft stickhandling. Just watch McDavid knife through two defensemen and deke the goalie out of his skates, in his first game after missing three months of his rookie season due to injury:


NHL 18 is about “giving fans the tools to be as creative as the players on the ice,” Ramjagsingh told Polygon. To that end, EA Vancouver is adding all kinds of new skill moves to the game, including one-handed dekes and the aforementioned Datsyukian puck flip. You’ll be able to chain those moves together, if you’re playing as an NHL star who is a skilled enough dangler.

These kinds of moves will be accessible even for people who aren’t longtime fans of EA’s hockey franchise. Holding L1/LB and tapping a face button will initiate one of the deke animations; you won’t need fancy finger work on the analog sticks. Advanced players will be happy to hear that EA Vancouver is tuning the manual stick deking to provide a more one-to-one feel, based on feedback from fans who said they liked the responsiveness of deking in the franchise’s last-generation heyday.

Defense in NHL 18 is also focused on giving you “full control of your stick,” said Ramjagsingh. Now you’ll be able to hold the R1/RB button and have complete control of your stick’s position. (Tapping it still does a poke check.) Simply holding the button will keep your stick in front of you, which is useful for deflecting shots out of play, and moving the right analog stick will let you sweep your hockey stick back and forth.

The key differentiator in NHL 18 is that you’ll now have full separation between your skates (left stick) and your stick (right stick), allowing you to point the stick in any direction while skating to wherever you want to go. What’s more, you’ll no longer have to glide (i.e., stop skating) to use these stick moves. For instance, you can be chasing down a rushing attacker, skating toward your net, while holding your stick behind you to take away a passing lane.

Passing is another area of focus for EA Vancouver this year. Experienced players have complained for years about requesting passes from CPU teammates, only to receive the puck behind them (or not at all). Ramjagsingh told Polygon that the developers have overhauled AI passing “from the ground up,” making sure that the computer will understand where you’re going and send the pass there, rather than to where you are when you call for the puck. The CPU will even try banking passes off the boards now. “It has really changed the flow of the play,” said Ramjagsingh.

EA Vancouver worked on other elements of the game’s AI, too — work that was necessary for the main new mode in NHL 18: NHL Threes.


The NHL has been using three-on-three overtime in non-playoff games for two seasons now, and it’s proved to be a hit with fans. With only six skaters on the ice, the rink is wide open for odd-man rushes and high-skill playmaking. EA is bringing three-on-three overtime to EA Sports Hockey League, the series’ online league mode, and also spinning it out into its own mode.

NHL Threes offers arcade-style hockey with three-on-three play. It’s meant to deliver fast-paced continuous action — the only faceoffs come at the start of each period, there’s no icing or offsides, and all penalties result in penalty shots — that’s still grounded in reality. “I would say it’s more arcade-inspired,” Ramjagsingh explained, noting that you’ll see bigger hits but no power-ups or big heads. Which is to say, it’s not really a modern analog to 3 on 3 NHL Arcade, the over-the-top hockey game that EA released in 2009 on PlayStation Network and Xbox Live Arcade.

The developers have come up with a unique presentation package for NHL Threes, including its own commentator. Rather than giving a play-by-play of the action, said Ramjagsingh, the guy is “just working the crowd based on what’s happening on the ice.” (Unlike the standard commentators, NBC Sports’ Mike Emrick and Eddie Olczyk, he’s not a named broadcaster.)

EA Vancouver/Electronic Arts
NHL Threes has its own smaller rinks.

The rink is smaller to match the lower player count — about 75 percent the size of a regulation NHL rink. The scoring isn’t typical, either. One optional feature, Money Pucks, can make a goal worth as many as three scores. You can choose to play “first to X goals,” or just keep the standard setup.

If all of this sounds like a frivolous throwaway mode, there’s at least one promising element to NHL Threes: a campaign. You’ll be able to take teams through multiple circuits with boss games at the end of each one. And as you defeat other clubs, you’ll earn rewards that you can take with you, like logos, uniforms, mascots and even players.

“Threes really forced us to make our AI better”

More importantly, Ramjagsingh said that developing NHL Threes paid dividends elsewhere in the game. “We had big plans for AI from a gameplay perspective,” he said. “Threes really forced us to make our AI better.”

Of course, the mode is also designed to bring in novice players, people who might be intimidated by the simulation hockey in NHL 18. Those who aren’t can jump into the deep end with the updates to Franchise mode.


“The reception was extremely, extremely positive,” said Ramjagsingh, when we asked about the fan feedback regarding NHL 17’s overhaul of the Be a GM mode into Franchise. With the impending debut of the Vegas Golden Knights — the first time the league has grown since the 2000-01 season — EA Vancouver saw an opportunity to expand Franchise mode once again.

The Golden Knights will be the 31st NHL franchise, and NHL 18 buyers will be able to play as them — with their gray and white jerseys, in the brand-new T-Mobile Arena — about three weeks before the club begins play in real life. Ramjagsingh explained that “going to 31 teams, from a tech perspective, was not a small feat for us,” so the developers wanted to do more.

“going to 31 teams was not a small feat for us”

Bringing the Golden Knights into NHL 18 provides for three new ways to play Franchise mode. You’ll be able to take control of Vegas and build your roster through the expansion draft, just like the real-life team is doing this week. If you choose to play as an existing team, you can submit a list of unprotected players for the expansion draft, one of whom will end up on the Golden Knights. And you can even expand the league yourself by creating a 32nd team and customizing its logos, uniforms and arena.


The NHL series has taken some licks recently, and EA Vancouver has worked hard to get back in fans’ good graces over the past three years. Ramjagsingh acknowledged that it’s hard to think about innovation when you’re just trying to catch up to where you were before.

“Our goal is to really push the boundaries, push creative innovation moving forward,” he said. “When you have that solid foundation, it allows you to think bigger.”


That road ahead will entail a transition to EA DICE’s Frostbite engine, but not yet. FIFA went to Frostbite last year and Madden is making the change this year; for now, Ramjagsingh said the NHL developers are gathering “lots of learnings” from those teams.

As for another feature that FIFA and Madden added in those same respective years — a cinematic story mode — that sounds anything but certain. “To be honest with you, from our fans specifically, haven’t heard a whole lot of direct requests around that,” Ramjagsingh told Polygon. He added that if the developers were to add it, they’d have to think about “what is the right experience for us?”

That might sound disappointing, but if there isn’t a specific desire from the series’ fans, it wouldn’t make sense for EA Vancouver to develop a story mode. Plus, the NHL team likely doesn’t have the same resources as the groups behind FIFA and Madden; it’s not an apples-to-apples comparison. In that light, EA Vancouver should carve out its own path, and it sounds like that’s just what it’s doing with NHL 18.