E3 2017: All The Games From Bethesda's Press Conference 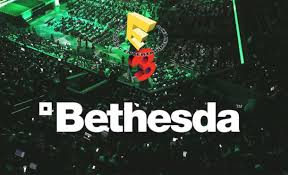 Bethesda's E3 2017 conference featured a good amount of gameplay and new content for existing games, like Skyrim on Switch, as well as details on a new game, Wolfenstein II: The New Colossus.

In total, Bethesda showed off nine games during its relatively short press conference. Most notably, every game shown is coming out this year.

We've put together a gallery of all the games that appeared so you can get an overview of everything that's coming up. You can also check our roundup of all the news from Bethesda's conference and go to our E3 2017 hub for everything from the event so far.

Dishonored: Death Of The Outsider DLC

A standalone expansion titled Dishonored: Death of the Outsider will put players in the shoes of Meagan Foster, an ally of Emily and Corvo in Dishonored 2. The trailer showed Meagan teleporing and making stealth kills, which led her to a meeting with Daud--the antagonist of the original game and star of its expansions.

Free-to-play card game Elder Scrolls Legends is getting a new Skyrim expansion. It adds 150 new cards to the game that introduce new mechanics like Shouts and plenty of dragons.

Elder Scrolls Online is an MMO based in the Elder Scrolls universe. In addition to its recent Morrowind expansion, it's getting two new DLC packs called The Horns of the Reach and Clockwork City.

The Evil Within 2 is a sequel to the 2014 horror game and is being developed by Resident Evil creator Shinji Mikami's studio. You'll apparently have to save your daughter, but not much else was revealed.

Owners of the HTC Vive VR platform will be able to experience the post-apocalyptic Boston of Fallout 4 in virtual reality. A montage of crazy moments like firing a Fat Man at a Deathclaw were on display, in addition to the more tranquil base building experience. There was artificial locomotion, meaning players aren’t bound to teleporting to get around.

Critically acclaimed RPG Skyrim is coming to Switch and getting new features, including Amiibo support! Scanning a Link Amiibo will unlock the Master Sword in-game. Archers can also use the Joy-Cons' motion controls to shoot down enemies.

Quake Champions is back in an open beta today, and anyone can sign up right now on the official website. There will also be a $1 million competition on August 26 during QuakeCon, Quake World Championships. In addition, Wolfenstein protagonist BJ Blazkowicz will be on the Quake roster as a playable character.

A direct sequel to 2014’s Wolfenstein: The New Order was officially revealed as the finale to Bethesda’s press conference. As last year’s teaser indicated, it’s titled Wolfenstein II: The New Colossus and franchise-long protagonist BJ Blazkowicz makes a return. He’ll be operating in Nazi-occupied America with a new cast of characters.