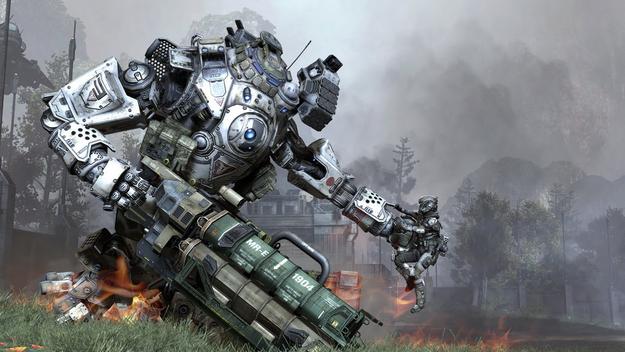 Only slightly over a year since the release of Respawn Entertainment's debut game into the industry, Titanfall, the studio has already confirmed their plans to create a sequel to the game. For those unaware, Respawn Entertainment is headed by Jason West and Vince Zampella, formerly known for their work in the Call of Duty franchise at Infinity Ward.

The original game, released initially on March 11, 2014 in the United States, provided players with a frenetic first-person shooter as they control agile "pilots" in a 6-on-6 player battlefield amongst various gametypes. The primary highlight of the game, however, was not the robust and smooth FPS feeling that we have all come to love, but the introduction of a grand, more controversial style of play: the "Titan". Pilots were paired with Titans that they could call in upon receiving notice of their assembly completion. Titans were enormous, armoured, bipedal machines wielding an array of weapons and abilities which could be brought into battle. Needless to say, they brought a dynamic to the game never experienced before by the community.

Several days ago, Respawn founder and CEO, Vince Zampella, confirmed that a sequel to Titanfall is in development, though it appears that they did not originally intend on making the announcement until later down the line. Zampella also stated in the quote that the game will be multiplatform, so PlayStation players can finally get in on the action:

"I guess EA announced a sequel, so I could play coy and pretend I don't know anything about it, or… yeah. So we're working on a sequel. No official name yet, but we're working on that. That's the main focus but we're starting up a second team and doing some smaller stuff too. Small, exploratory, taking it slow! It'll be multiplatform."

It is especially exciting to know that the studio is taking on the initiative to explore new areas while also developing the sequel. No doubt it will be as anticipated as the pilot title, but until more news uncovers there is no way to tell what sort of features they will implement into the game.

Also recently, Respawn Entertainment decided to remove the price tag for the Season Pass and all DLC Expansions for Titanfall in celebration for their first year anniversary. Without mentioning any time limit on the generous offer, it was speculated that it would only last for a short period. This tweet from the official Titanfall Twitter confirmed otherwise: "This content is free starting now and will remain free for all users who purchase Titanfall for Xbox One, Xbox 360 and PC". The interview with Zampella also revealed his fascination with how the Evolve team announced all their DLC to be free of charge in the face of community inclusiveness. Zampella considers "it a fantastic way to do it", since releasing paid maps "splits the community and it makes it harder for matchmaking...[making it] messy". It looks like they decided to follow in the tracks of Turtle Rock Studios by opening up and let their entire player base enjoy all the game has to offer at no extra cost.

I've certainly had my fair share of fun playing Titanfall, but as a latecomer onto the train I still have a long way to go until I reach 10th Generation. What would you like to see changed or tweaked in the sequel? Or would you like everything in Titanfall to stay as it is?

Sources:
Titanfall 2 confirmed to be in development for PC, PS4, Xbox One
In the spirit of inclusiveness all Evolve DLC maps will be free
Titanfall Gameplay Video