Details on the Next Battlefield: Hardline Beta Emerge 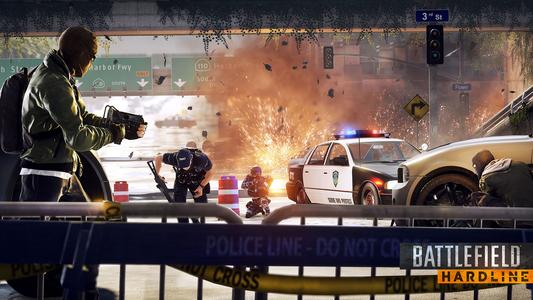 When EA announced Battlefield Hardline many players were thrilled to hear that they can try out the game in an early Beta. The first Beta didn’t last too long, but it gave players a lot to be excited about. EA currently plans to release a second Beta packed with many more features in January. Visceral Games general manager, Steve Papoutsis, has recently tweeted out a lot of information about what we can expect from future versions of Hardline.

When EA first announced the second Beta, they made it seem like it won’t be accessible to last-gen console players. Luckily, Papoutsis has clarified that a Beta will be coming to next-gen and last-gen consoles before launch. However, he never specified the timing or which Beta it will be. Either way, everyone will be able to try the game before it’s release in 2015.

Aside from platform information, Papoutsis also tweeted out some interesting details on the game. The first of which is that the Beta is planned to have 150 ranks. 150, however, is not a final number and is subject to change in both the Beta and final game. Much like previous games, there will also be awards for Battlefield veterans and premium members.

Papoutsis also gave us some insight on what we can expect to see gameplay-wise. He told us the M1911, M416, and ballistic shield will all be returning along with various new equipment. He also stated that weapons will not be affected by visual recoil, which is rather interesting. We can then expect even more content to come in the form of DLC, which will be discussed sometime in January.

Finally, we also got some more information on the game modes in Hardline. Currently two eSports game modes are planned. One of which is the hostage-based gamemode called Rescue, while the other mode has yet to be announced. There has also been confirmation that team deathmatch will be returning and a vehicle-based mode called Hotwire will be introduced. Team deathmatch is rather self-explanatory, but we don’t know much about Hotwire. Fortunately, Papoutsis said we can expect to hear more about Hotwire later this month.

The next Beta is currently planned for January and will likely contain all the aforementioned features. The game is then supposed to be released in February, but since we’ve already seen one delay anything is possible. Regardless, Hardline brings a lot of new features to the table and it looks like it will be a very exciting game.