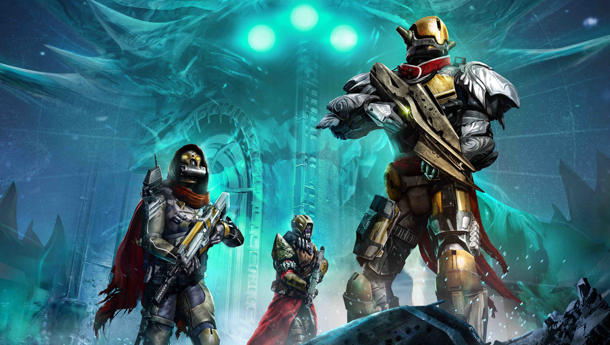 The initial launch of Bungie’s latest game, Destiny, left gamers with a bag of mixed emotions. A lot of gamers were excited to see Bungie take a step in a new direction away from Halo, but the lackluster story and Sony favoritism has been a bit unsettling. Once again, Bungie has peaked the various emotions of gamers after announcing Destiny’s first expansion, The Dark Below.

The Dark Below will put a lot new gear in the hands of the players. There will be multiple new legendary and exotic weapons included in the DLC. Three of which are the “dragons breath” rocket launcher, a new fusion rifle, and a hive-themed shotgun. Each class will also be receiving some new equipment. The hunters will get a new cloak, the titans will get new armor, and warlocks will get a new chest piece. Finally, players will also be getting five additional bounty slots.

In addition to the new gear, players can now look forward to some new raids and a higher level cap. The new six-player raid, Corta’s End, will take place in the Hellmouth. However, even if you buy the DLC, Crota's End will not be available right away and has to be unlocked because Bungie wants it to be an “endgame experience”. Bungie is also raising the soft level cap of 30 to 32, further expanding the “endgame experience” Bungie desires.

One of the biggest changes The Dark Below has to offer is the new missions. Harold Ryan, Bungie’s president, has admitted to the fact that Destiny’s story wasn’t all that great. However, he hopes that this will change with the new story-based missions in The Dark Below. Bungie has listened to fan feedback, so the new missions have a completely different structure than the pre-existing missions. The new missions are given to you by a new vendor named Eris, who needs your help in stopping the leader of the Hive, Crota, from dominating the Solar System. Harold Ryan claims the new story is “much more emergent and interactive” due to the exposition of Eris.

Lastly, The Dark Below also adds in three new multiplayer maps. The first of which, The Pantheon, takes place inside a Vex temple somewhere in The Black Garden. The Pantheon is said to be an “ interesting close quarters combat map”. There’s also a new vehicle map titled Skyshock, but unfortunately it does not include any new vehicles. Finally we have Cauldron, which is another close quarters map

Despite Destiny’s rather mediocre reviews and criticism, Bungie still wants to keep it alive. They hope that these new missions will give a new sense of immersion and the new loot will keep people playing the game. While the Sony exclusives may be a bit discouraging to some Xbox players, The Dark Below seems to take Destiny a whole new level and should have players excited regardless of their platform of choice.

Credit: Selena Gomez for the topic submission.
About author