Destiny is now only 2 weeks away from the official launch date. If you are lucky enough to get your hands on a copy a bit early, you can get started on your long awaited journey ahead of the masses. Because according to Bungie, Destiny’s servers will be open as soon as it is midnight somewhere in the world, meaning that the International Date Line is the mark we have to wait for. In the US that means early in the morning the day before launch, September 8th around 8AM EST. Set your alarms, Guardians. 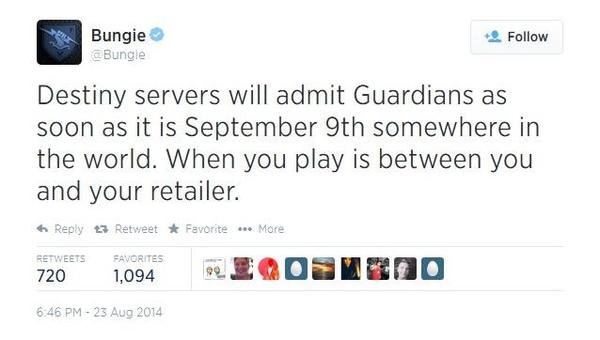 According to this announcement, it would be safe to believe that players will not be receiving a ban if they log on to the servers prior to September 9th, like they usually would if Sony or Microsoft’s policies were to be followed. They would ban anyone logging in early assuming they got illegal copies, which is rather ridiculous considering time zones, shipping times and other factors that are out of the hands of both retailers and consumers. Legal copies are possible to get a hold of before launch, and it is great to see that Bungie acknowledges this, just like Respawn Entertainment did with Titanfall, where no one was banned for starting early.

If you want to get an early start at Destiny, you obviously need to get your hands a copy, and that is almost impossible to plan for. Pre-orders will be shipped to arrive in time, and sometimes that means getting them earlier than the official release date. But you can't bank on it. And assuming your local game store will forget what date it is, is not very likely either. However, if you play on PS3 or PS4 you have a better shot. Destiny is one of the first games to be available for download and installment prior to launch, and if you are allowed to to this a day ahead in order to have the game ready to go at the official launch, you might be able to start on September 8th. Unfortunately, Xbox gamers are out of luck on this possibility, as this feature first will be available by the end of the month with the launch of FIFA 15 and Forza Horizon 2.

UPDATE: Destiny can now be preordered and preloaded on Xbox One. Source

Are you aiming for a head start? Do you have a plan to get ahead of everyone, and be a veteran at day one?