Destiny - Is the Hype Real? 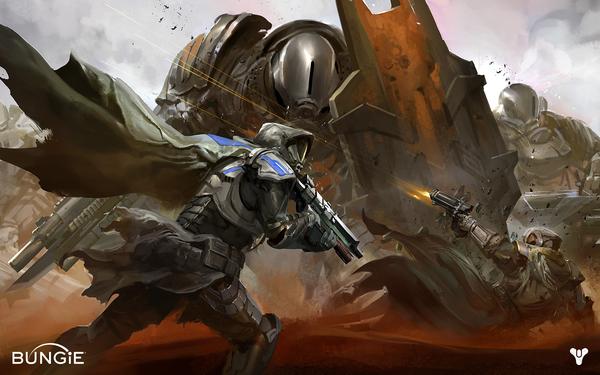 Destiny, the game we have been waiting for, the game we did not really know if we were going to get, but we got it because all our friends did, the game that is said to be the one to take the throne in the console world, and keep it for a long time. We have played it for a few days now, and what do we think? Did it live up to the massive hype? Personally, I think it is an awesome experience with a few major flaws that needs to be sorted as soon as possible. If not, I'm not sure I will be downloading the DLCs when they arrive.

First of all, where is the story? After spending $500 millions making an epic game, did they forget to tell us why we are in it? I feel that the small bits of info they give us along the campaign, is far from enough to satisfy my curiosity, and it leaves me with no sense of sympathy for the character I'm playing, the people I'm helping or the faction I'm supporting. We are supposed to be able to learn more from the Grimoire Cards we gather through out the game, and that is nice enough. But then again, in order to access them, I have to go to Bungie.net or use the Destiny App on my phone. I can't be bothered doing that when I'm playing, come on. However, the loading screens take forever, I guess that gives me some time to read. It is hard to understand why they didn't use that insanely long loading time to tell us more about the background of the game, or even display the Grimoire Cards here, but instead they choose to show the same boring scene over and over again. It really makes no sense.

And then we have the missions. I can't believe Bungie managed to screw this up. They are all the same: land on a planet, shoot some enemies, deploy the Ghost to scan something, kill a few waves of enemies and a boss while you wait, and "boom", mission is over and you are sent back to the flight screen. Out of everything that could be done wrong in a game like Destiny, I did not think lack of variety would be one of the mistakes made. They did the same with enemies, they are all just the same bunch of generic bad guy creatures throughout the entire game. Killing Dregs and Knights and Wizards for hours on end does lose its appeal after a while. I can't help but to make a comparison to the enemies in Halo, which in my opinion had a lot more going for them, they at least had some character. Like the grunts saying things like "Oh my stars and garters!" when you surprise them behind cover. Small things that made them into something more than a collection of pixels to aim for. Even the bosses are nothing but bullet sponges, you will remember them for sure, but probably not because of the skill it took to defeat them, but because of all the bullets you had to fire while moving in the same pattern to match their lazily programmed moves. It's a shame really. It feels like the game is designed to be one huge grind, and it's not even going to be an amusing one.

What was Bungie thinking when they set their level cap? The soft cap set on 20 is reachable in a day. The hard cap on 30 takes a little longer, but you will meet players in multiplayer on level 25 - 26 already, and we are just a few days in. How long will the game last for them? There's a cap on how many marks you can collect in a week, and that will slow them down a little bit, but not for long, and that is just annoying, not challenging. I assume the level cap will be raised in a DLC at some point, and of course the weekly challenges, the different strike missions and the anticipated raids will be something to sink our teeth into. But for how long? A level cap set a 40 and a heap more missions and variety would have kept me playing right now, not writing.

You can't play with more than 2 of your friends at a time. If you have 3 friends that want to play, you will have to go to the Crucible. If you don't have any friends online, and you meet someone during gameplay, you can't just invite them to your Fireteam or talk to them, oh no. This game, that is supposed to be a social one, forces you to go through several steps in order to make contact. By the time you have sent your request, your potential partner in crime will be long gone and have no idea what that random invite is all about. GG Bungie.

Don't get me wrong, I enjoy the game, I actually like it a lot. It is a beautiful and breathtaking piece of work, with several strong points and I'm sure I'll be playing it for quite some time still. I will grind to get Marks, Coins, Glimmer and Light so I can try the Raids when they are available. I will be running around in the Crucible with my friends, and I will most definitely be dancing in the Tower, maybe even get a few friends with me to jump the fan for an hour. But I'm curious to see if I'm the only one losing interest in the game a lot sooner than I expected due to the lack of levels, mission variety and story.

What is your opinion of the game? Is the hype real? How long will you last, will you become legend?