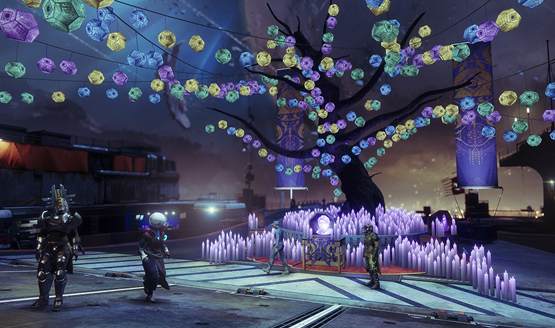 With Halloween looming, the launch of Destiny 2's Festival of the Lost activity is drawing near. Bungie had previously only offered a small tease of what to expect, but it's now provided an overview of the new types of activities that await players, as well as a look at the Halloween-themed rewards that will be available during the event.

Perhaps the most significant component of Festival of the Lost is something called the Haunted Forest. Either solo or with a team, players will be able to venture inside to defeat its "ghouls and demons, who are spooking up a storm." There will be a 15-minute time limit to contend with, and the area will get more difficult as you make it further inside.

Toward the end of the event, there will also be a questline to investigate the killing of Master Ives, a cryptarch previously located in the Vestian Outpost. As you work to uncover the truth, you'll be able to earn a piece of Powerful gear, but this won't begin until the weekly reset on October 30.

Amanda Holliday, the shipwright at the Tower, has been charged with leading the general festivities during Festival of the Lost. The Tower will be adorned with spooky decorations, and she'll offer daily bounties that pay out a new type of item called Fragmented Souls. These can be cashed in for Festival of the Lost masks and a new Legendary auto rifle called Horror Story. There will also be new Triumphs to work toward completing, presumably related to all of the aforementioned activities.

As with the Solstice of Heroes event back in August, filling your XP bar (if you've reached the level cap) during the event will be particularly valuable. You'll still receive the standard Bright Engram but also get an Ephemeral Engram, which includes new rewards. Those include a guitar emote and a new dance, as well as new Ghosts, ships, and a sparrow. Ephemeral Engrams will be sold by Tess at Eververse, who will also have a selection of these new items for direct sale in exchange for Bright Dust.

Festival of the Lost begins next Tuesday, October 16, the same day that the first of two big updates arrives for Destiny 2. The event concludes on November 6. It does not require owning Forsaken to take part in.