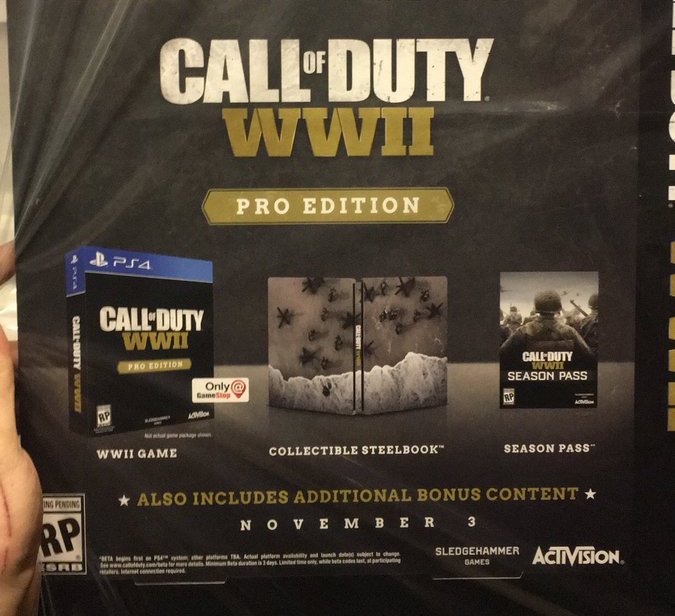 Activision today formally announced Call of Duty: WWII. When the game launches on November 3, you'll be able to pick it up in multiple editions, beginning with physical or digital versions for $60. One tier above that is the Digital Deluxe Edition, which comes with the game's Season Pass "and more" for $100. Additionally, GameStop is the exclusive seller of the Pro Edition, which contains the Season Pass, a collectible steelbook case, "and more" for $100.

Everyone who preorders Call of Duty: WWII gets access to a "Private Beta," which launches first on PlayStation 4 later this year. Activision has not said when specifically it will arrive or what it will contain.

Meanwhile, GameStop sent out its own news release today for Call of Duty: WWII. Everyone who preorders at GameStop will receive a limited-edition hat, starting now in-store. Those who preorder online can print out their order confirmation and bring it to a store to claim the hat.

GameStop also announced that people who preorder Call of Duty: WWII or another Activision game, Destiny 2, will get an extra 40 percent trade value for trades for the preorder. This offer is good April 26 through April 30, and PowerUp Rewards Pro members get 50 percent extra trade value. Additionally, those who preorder both get an extra 50 percent on their trades, while Pro members get 60 percent.