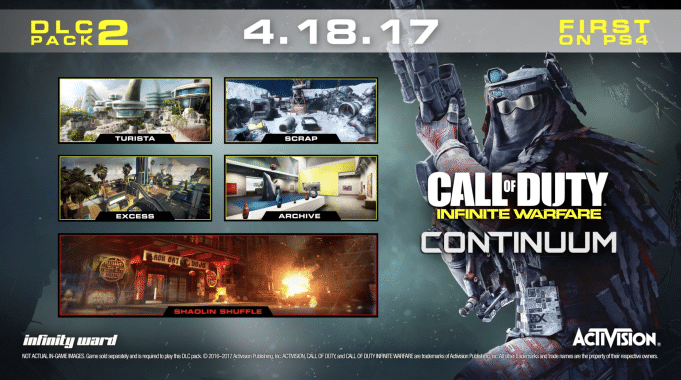 Call of Duty: Infinite Warfare's second map pack has been revealed, and it's called Continuum. The DLC contains four new maps: Turista, a spa resort contained within the skeleton of a giant ancient creature; Scrap, which is set on an abandoned Moonbase junkyard; Archive, a post-futuristic art gallery; and Excess, which is a small-scale re-imagining of the Modern Warfare 2 map Rust.

Continuum will cost $15 when it launches on April 18 for PlayStation 4; "other platforms [will] follow," states Activision. Infinite Warfare's previous map pack, Sabotage, came to Xbox One and PC around five weeks after its PS4 launch thanks to a timed-exclusivity deal between Activision and Sony. Call of Duty: Modern Warfare Remastered also received a DLC pack recently, adding the four maps contained in Call of Duty 4's Variety Pack