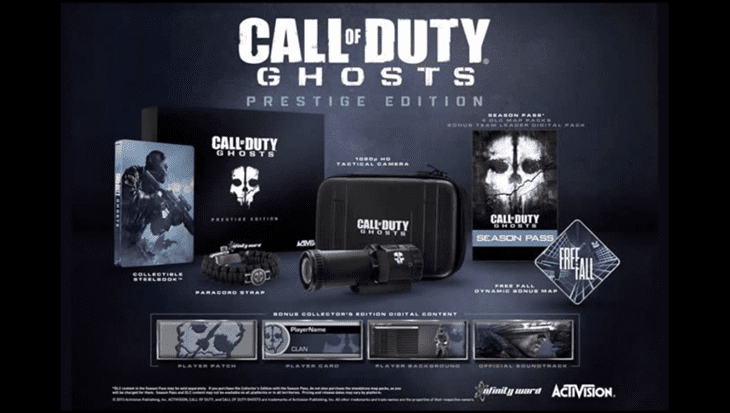 ​
From night vision goggles, remote controlled RC-XDs and flyable Quadrotors Drones, The Call of Duty series has been in the mode to bring unique editions of its muti-million selling blockbuster to the market and this year's highly anticipated Call of Duty:Ghosts is no exception to the tradition. During the multiplayer reveal on Wednesday, Activision announced there will be Hardened and Prestige Editions of the game, which are now available for pre-order and are set to be released the same time as the regular edition; this November. So what will be included in the Prestige Edition this year you ask? Well, let us take a look:​
​
The $199.99 version will bring a variety of content to keep you play as well as some goodies to show off to others at your house, apartment, parents basement, etc. Here is what it will include:​
The season pass will include 4 upcoming DLC map packs, the "Team Leader Pack" and other exclusive digital content, also regardless of which version of the game you purchase your online rank and unlocks will be cross generation, this means players on Xbox 360 can also level up on the Xbox One and Playstation 3 players can do the same with the Playstation 4.

If you don't have $200 to dish out, then the cheaper $119.99 edition (which includes all above except the camera) and regular editions will be on sale at launch respectively. So, which edition will you be purchasing? Do you have the money to splash out on the Prestige Edition, or will you be sticking with the Standard edition? Let us know in the comments below.

You can also check out Jake and Amir from CollegeHumor demonstrate how someone can put the helmet cam to good use.