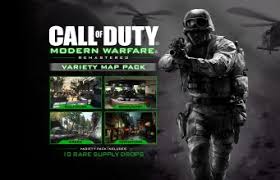 Following its release in March for PlayStation 4, the Variety Map Pack is now available for Call of Duty: Modern Warfare Remastered on Xbox One and PC (via CharlieIntel). If that name sounds familiar, it's because the Variety Map Pack was released in 2008 for Call of Duty 4: Modern Warfare. It adds the same four maps from that expansion, Broadcast, Chinatown, Creek, and Killhouse, but with updated graphics.

The expansion costs $15. It also comes with 10 "Rare" supply drops, which contain cosmetic items. These are normally unlocked through gameplay or by spending real money.

All Call of Duty DLC now launches first on PlayStation as part of a timed-exclusivity deal between Activision and Sony.