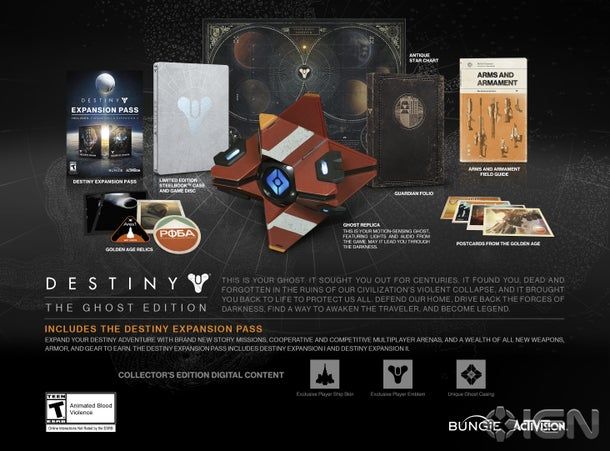 It's about time! Bungie has just announced the official timing of the beta of its new upcoming game, Destiny. It will launch on July 17th for the Playstation 3 and Playstation 4. This news just came in less than an hour ago on IGN, and has many gamers digging their nails into their skin waiting for the beta. Now, of course with every beta, there are glitches and errors that will follow. On the 21st of July, the beta will be taken down for maintenance, and then brought back up for the following platforms on July 23rd; Xbox One, Xbox 360, Playstation 4, and the Playstation 3. The beta will then end on the 27th of July. So, if you're a PS4 or a PS3 owner, you get the beta before Xbox users do, so enjoy it while it lasts! The beta will include some Story Missions, a strike mission, and PVP maps.

That's not the only thing that was announced today, either. IGN got to unbox all three of the "Collector's Editions" that will be released later this year for the game, and they definitely look amazing. There are three in total, all of which will obviously contain the game and bonus extras along the side. The Ghost edition is a big bundle, and it includes a lot of the extras that you would get in game. If you pre-order the Ghost edition, you will be receivng the following (Quoted directly from IGN); "A steelbook disc case and disc copy of the game, A field manual with "handwritten" notes, An "antique" star chart, A Guardian folio, 4 postcards from the Golden Age (i.e. Earth before the Darkness decimated it), The Destiny Expansion Pass ($34.99 value; good for Expansion I and Expansion II), Collector's Edition Digital Content (an in-game Ghost skin, player emblem, and ship skin), And the centerpiece, a life-size replica of the Ghost robot, complete with lights and Peter Dinklage dialogue samples.

Now, obviously people like myself wouldn't expect such an edtition to be cheap, and it isn't. The Ghost edition will cost you $150 right out of your pocket. But, if you're a collector of some sorts, or you just want it all, this is a great option for you. The picture above showcases everything in a nutshell. Bungie also stated that this would be a very limited offer, and will be limited in availability. If you want to get your hands on such an item, "Amazon currently has it right now in stock", according to IGN. But wait, there's more! The Limited Edition of Destiny includes everything above minus the replica of the Ghost Robot. This will probably be the preferred choice of many, but it will also be limited in availability. Amazon is currently carrying this as well, at a price of $99.99.

Now, there are people who would rather download the game digitally rather than buying an actual disk, like myself. Good news is, there is a Digital Guardian Edition for $89.99. For the digital players, you will also be receiving a little bit of a "benefit" if you choose this route. You get early access to the Vanguard Armory, as well as player emblem pre-order bonuses. You will also get reserved access to the later expansions of Destiny, "The Dark Below" and "House of Wolves". Not only that, but you also get the digital content of the Ghosts Edition.

All of this, in one day. I know for a fact that many of you are looking forward to this game's release, and I want your opinions on this. Will you be buying any of the three mentioned special editions of Destiny? Or will you just stick to the regular addition and pay $60 for it, like you normally would?

Source (Pic was used from source, only one I could find)
About author