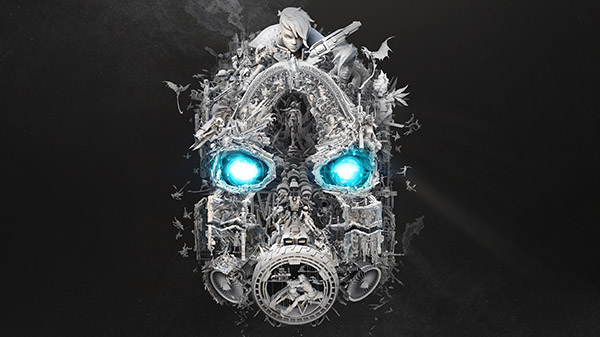 After numerous teases, Gearbox Software has seemingly announced a new Borderlands title and released a short teaser for it. While the video, which you can watch below, doesn't outright state it is the third numbered entry in the series, it certainly looks to be an entirely new entry in the series. The teaser, which is titled "Mask of Mayhem," takes the viewer through a kind of diorama in which characters and familiar looking enemies are posed in a way that builds intrigue around what the game could be about. It also teases some of the high jinks players will get into.

It opens with a shot of Psychos prostrating before a very large gun-wielding character, who himself is flanked by a statue of an angelic figure holding an upside down version of Borderlands' iconic Vault symbol. As the camera moves seamlessly through and around other scenarios we get to see a dragon, a character shooting from a buggy, a bunch of figures giving each other jumping high-fives, a robot ninja, and plenty undercut swept-over hairstyles.

As the teaser reaches its conclusion, it pulls out from the madness to reveal that it was all the tapestry on the iconic mask the Psycho enemies wear. Although there's no gameplay, Gearbox is expected to show more of this new Borderlands at its PAX East panel on March 28. The panel is set to be streamed at 11 AM PST / 2 PM EDT / 6 PM GMT / 5 AM on March 29 AEDT, and of course GameSpot will be at hand to bring you the news from the panel.

Over the past few weeks, Gearbox has been tweeting teases for a new Borderlands announcement, one of which was a pixelated photo of a character staring at a structure in the distance. Prior to that, there was an image of some kind of robotic creature on an operating table. Gearbox has promised "never-before-seen reveals, exclusives, and surprises" at the panel, so we'll have more information on what the developer has cooking soon.