Bob Ross will be playable in Smite 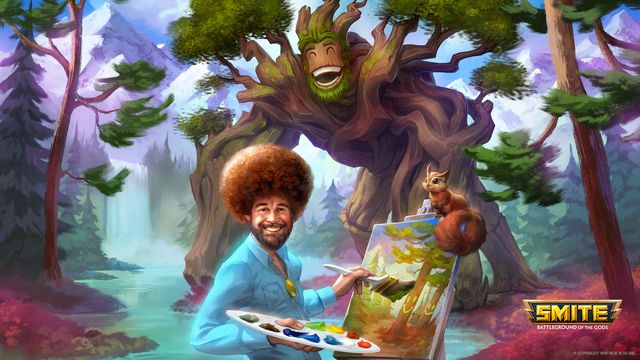 Amiable, laid-back painter Bob Ross, the late host of PBS show The Joy of Painting, is coming to Hi-Rez Studios’ MOBA Smite next week, the studio revealed this week. Ross will make an appearance in Smite as a skin for an existing character, Sylvanus, and will be armed with plenty of the painter’s trademarks, including happy little trees and clouds.

The Bob Ross skin will turn Sylvanus into the painter, complete with brush, palette and easel. Sylvanus’ treant, which he rides during matches, will also get the Bob Ross treatment in the form of a big smile and a bright green beard.

Sylvanus’ attacks have also been re-skinned with some Bob Ross flavor. He’ll throw paint at his foes, deploy cheery clouds and summon happy trees. Sylvanus’ ultimate ability, Wrath of Terra, no longer summons deadly roots from the ground; instead, an array of paintbrushes will burst forth from the earth, damaging foes and painting the ground with a Bob Ross-style landscape.

Hi-Rez has other Bob Ross-branded cosmetics coming as part of a Bob Ross Bundle. Players will also get an exclusive loading frame, jump stamp and loading screen background. The bundle will be sold for $9.99 or 700 gems in-game when it’s released on Mac and Windows PC on May 9 and on console on May 16.