Black Ops III May Give us The Full Story Behind Zombies 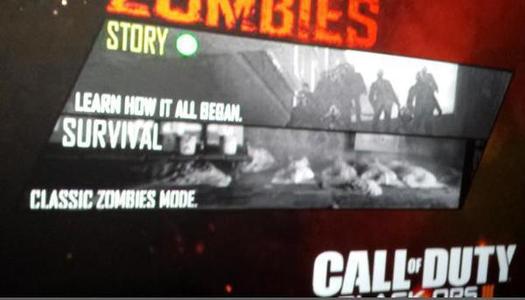 In 2008, Treyarch decided to include a Nazi Zombies horde mode in Call of Duty: World at War. Seven years later, this mode is one of the most compelling features of the modern Call of Duty games. Prior to an official announcement, there was some leaked information that claimed zombies will be returning in Black Ops III. The leak also went into detail and claimed that there will a fully-fledged story mode. Today, a leaked image of the zombies menu also shows a playable story mode.

The various hidden messages, storylines, and easter eggs have kept zombies very intriguing. There are countless numbers of people who are dedicated to uncovering the truth behind it all. In World at War, the back story started as disjointed easter eggs, but as the franchise evolved, a more finite storyline started to appear.

​
Black Ops II gave us a lot insight into the meaning behind zombies. Unfortunately, the ending of the Origins easter egg gave the story an unexpected twist and left some gamers disappointed. Luckily, the leaked image (shown above) gives hope that Black Ops III will finally clarify how zombies started.

While this may seem like a really great addition to the game, it could also signify the end of zombies. The story has kept the series interesting and has made many gamers return to Call of Duty games. If Treyarch decides to finally tie all the loose ends, there won’t be much room for zombies in future titles. However, there is still the chance that Treyarch won’t give us the full story or that this information is fake.
About author