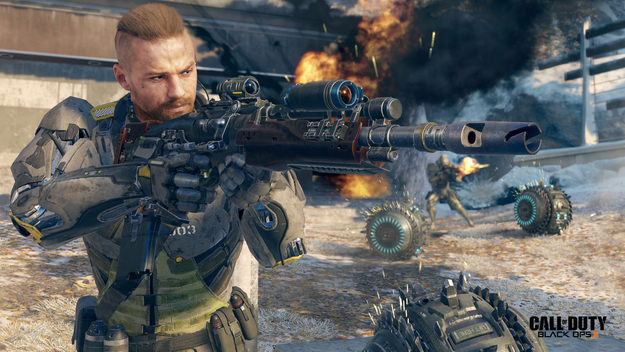 With the game releasing in roughly two weeks, the developers for Black Ops 3 have unveiled a multitude of new details for the third installment of Black Ops. Whether it was additional game modes, or changes to the multiplayer, the devs and publishing company have been consistently updating the gaming community on their new FPS. Although amidst all of this, there hasn’t been much news about what players with last generation consoles can expect to see. Until now, that is.​
While discussing the game’s frame rate with Develop, Beenox Creative Director Thomas Wilson has said that accomplishing 60fps while attempting to port a current gen game to previous gen consoles has proven to be quite difficult. That being said, fans of the series that are still on last gen consoles may have to accept the fact that Black Ops 3 will most likely only be running at around 30fps. The developers have been actively working on this frame rate issue, but have ultimately come up empty-handed.

For a franchise that has hit 60fps on all of its previous titles, this news may come as somewhat of a surprise. However, the sheer amount of detail required to port a game that is meant for current gen consoles onto last gen must be taken into consideration. This is also the reason why last generation players will not be able to experience the game’s campaign, being limited to the multiplayer and zombie modes. Furthermore, last gen players will also not have access to the Season Pass, nor "The Giant" zombies bonus map. Other than this unfortunate news regarding frame rate, the developers have released an official launch trailer that you can check out below. It showcases gameplay from all of the game’s features. Including it’s action-packed campaign, intense multiplayer, and the latest incarnation of zombie mode.


​
UPDATE - In the latest issue of Xbox magazine one of the producers for Black Ops 3, Jason Blundell, has said that the newest version of Zombies will be the largest map for the game mode that they've ever created. Dubbed 'Shadows of Evil,' it will be taking place in a noir-style city that will feature many different ways to ravage your way through the waves of zombies. Players will have the opportunity to wipe out the crowds of undead while carefully treading over scaffolding, traversing through a tram transit system, among many other things. Considering it's the largest version of Zombies yet, we can certainly expect it to be even more immersive than it always has been.

​
Call of Duty: Black Ops 3 will be hitting stores on November 6th for Xbox One, PlayStation 4, and PC. While also making its way to Xbox 360 and PlayStation 3.