Black Desert Online, an innovative MMO or just the same-old?

​
Gamers have finally grown accustomed to receiving the same content with a different coat of paint when it comes to MMORPGs. There are countless games available in that genre that all fall into certain categories. Some are WoW clones, F2P/P2W, grindfests, trade-bloated, or some a combination of all the above. However, Korean developer Pearl Abyss promises an MMORPG that will break out of this routine, called Black Desert. 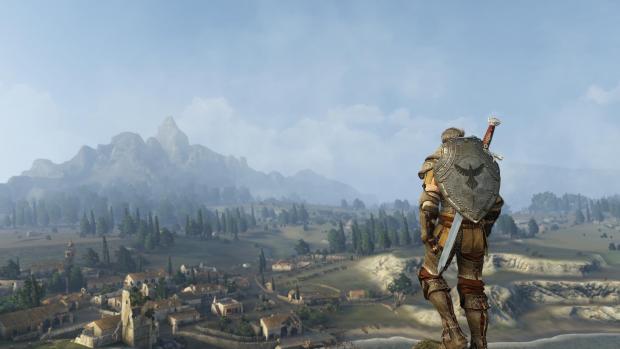 An example of the gorgeous visuals in BDO.
​
Black Desert went into production way back in 2010, with an expected release date in 2015. There is very little hype around the game, but it has already piqued the attention of PC gamers, even prompting a small community to form. With two closed beta tests already concluded, the game has proved how it stands out in certain ways from the competition and games that are already on the market. While the game has a pretty generic class system (Ranger for long range, Sorcerer as mage, Giant as tank, and Warrior as melee), what it lacks for in class innovation, it makes up for with it's host of unique features.

To begin with, the visuals in this game are spectacular, with beautiful dynamic lighting, amazing character design, a host of varying environments, and an innovative worldwide weather system, this game even gives the likes of Skyrim a run for its money. Black Desert uses Pearl Abyss' engine of the same name to increase rendering speeds, thus allowing the game to have minimal loading screens for a seamless open-world experience. This engine also makes Black Desert able to handle large numbers of players online simultaneously, especially for events such as sieges.
​

Expect huge amounts of players duking it out in Sieges.​
Sieges are a feature of Black Desert allowing for massive amounts of players to partake in a single battle. Sieges can hold an unlimited amount of players, allowing for PVP battles on a tremendous scale, and can last for hours at a time. Players involved with sieges can use mounts, artillery, and get up-close and personal. When players die during sieges, there is even a chance of dropping some of their non-bound items. With so much happening at once and so much focus on graphics and custom character data, gamers are definitely going to need good hardware.

Combat is innovative in that players will be able to attack while on their mounts, and it will not be your typical tab lock-on system. Players must manually aim their attacks, dodge, counter, etc. Bosses such as dragons will randomly attack, and mobs will be more dangerous at night. You can expect your typical dungeon and event system, however, which is a bit of a disappointment. Pearl Abyss could have come up with random events more innovative than protecting a caravan or saving a shopkeeper.

The game world and characters have a Final Fantasy feel to them.​
The game has a parkour system, allowing an amount of movement and freedom never before experienced in an MMORPG, weather events including hurricanes, tornadoes, etc. Weather will also affect what players need to equip, such as cold-weather gear in colder areas, because weather also affects player stats depending on what a player has equipped. There is a dynamic day/night cycle which determines visibility, mob spawning, and NPC availability. Players will be able to own and customize their own houses, and there is a unique mount system where mounts must be fed, taken care of, and can even be bred with each other to create unique mounts. Last but not least, Black Desert has a ridiculously in-depth character creator, allowing you to morph every inch of your character's body. Yes, you read that correctly, every inch. Customize your face, torso, legs, eyes, even your hair and how individual strands behave. Yes, it's that in-depth.

​
There is no specific release date for Black Desert. The game is still under development and the developer is very keen on listening to player feedback from the beta tests. Overall it looks like the game will (hopefully) be a success, and a breath of fresh air for the MMORPG world.