Big Doom Update Unlocks DLC For All, And Revamp To Multiplayer Systems 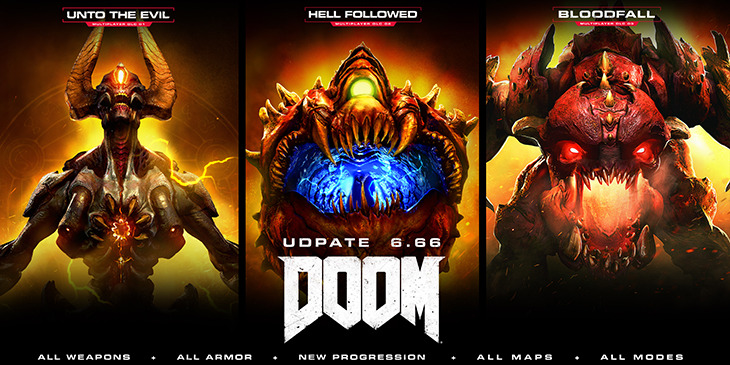 Doom was acclaimed upon its release last year, but it was in large part due to its stellar campaign. Its multiplayer component was widely regarded as the weaker of the two components, but a new update has introduced some very welcome-sounding improvements.

Most notably, Bethesda and id Software are doing away with Doom's $40 season pass and unlocking its multiplayer DLC for all players. That means that everyone who owns the game--or anyone who now picks it up--will get their hands on nine additional maps, three guns, three demons, and new armor and equipment options for free. You can see a trailer for the third and final DLC pack above.

Another change addresses player complaints about the Hack Module system, which has been removed in favor of a new Runes system. Previously, Hack Modules were consumable items you could use to obtain various boosts for a limited time. Now, Runes are simply abilities or perks you earn and are then able to equip as part of your loadout.

Multiplayer progression has been revamped as well. Rather than unlocking new things randomly, everything is tied to a specific schedule of sorts. That means you'll get your hands on specific guns, demons, equipment, and customization options by reaching certain levels or completing specific tasks. This gives you some level of control, letting you seek out a specific piece of gear that you might want.

Existing players will see their levels reset, but that doesn't mean they have to abandon everything they've unlocked. Players will be given a choice of retaining their unlocks or resetting their progress so that they can begin unlocking everything from scratch, in the same way that a new player now does. Those who have played the game prior to this update will get a special badge to acknowledge their accomplishments, while those who have reached the level cap will get a special Slayer badge.

Finally, the in-game HUD has been reworked to provide "better callouts for challenges, awards and scoring," according to a blog post by game director Marty Stratton. "The kill card has been completely revised to provide players a more clear and accurate account of their demise, including not just who killed them but also the players, weapon types, and damage that combined to kill them." Other changes are also present throughout the menus and post-match summary screens.

Following the release of today's update, version 6.66, those who haven't yet picked up the game will soon be able to try it for free. A free play event will begin on all platforms over the remainder of the month, while the game itself will be on sale for just $15/£12/AU$18 during the free promotion. The free weekend events will include the first two levels of the campaign along with the full multiplayer and SnapMap modes. Here's when the free weekend is live on each platform: