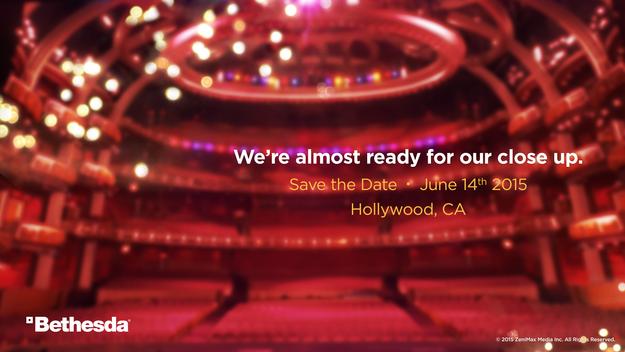 For the first time Bethesda will join the likes of EA and Ubisoft and hold their own E3 showcase when the convention kicks off in June, as announced today on their blog. Currently their confirmed upcoming releases consists of Doom 4 and the F2P shooter BattleCry, which tells us that there must be something else new for them to present, as this seems to be a little on the short side for an entire showcase on the industry's biggest expo. They will have Elder Scrolls Online released on Xbox One and PlayStation 4 just a few days prior to E3, but adding that to the line up still doesn't seem enough for a name as big as Bethesda. Which leaves room for a lot of speculation: Dishonored 2? Fallout 4? The Elder Scrolls VI? Wolfenstein: The Newest Order? Rage 2? A brand new IP?

For many of us, the chance to hear news on a new Fallout game is definitely the most interesting option. So many rumors, so many hoaxes and so many wishes and dreams crushed each time a rumor is debunked. Over the last few years websites have popped up indicating locations, dates and possible announcements has been tossed around, but Bethesda has kept disapproving these as nothing but nonsense. So if we expect news on Fallout this June, will they crush our hopes again? Or will this finally be the day they let us know?

They are playing with their cards held close to the chest, and just recently, Pete Hines, the public face of Bethesda, said that he is “not going to GDC 2015". Meaning that there will be no news from them when the conference starts on March 2nd. Maybe that is because they are revealing Fallout 4 on E3? In April 2013, they announced that "Parts of our team have also been in pre-production on our next major project, and that game is at the point where it requires the studio’s full attention to make it our biggest and best work yet." If this "project" is Fallout, they definitely had time to make progress, and possibly be ready to share some of it to eager fans. But for now, all we can do is wait.

If you want to be there and watch the showcase with your own eyes, Bethesda also mentioned that they have a few seats saved for fans. Details on how to get these spots will be revealed later. Everyone else can watch the event livestreamed on Twitch.

Well, I'm on that hype train. How about you? Are we getting our hopes up for nothing again?