Become a Legend Next April in Total War: Warhammer

​
The Creative Assembly's Total War series has been at the forefront of PC strategy games with its historical entries where fans got to play in settings and scenarios ripped straight out of the past. Their first title Shogun: Total War allowed players to take control of a Japanese daimyo in feudal Japan while giving you the task of conquering Japan and becoming its shogun. Since then, the series has explored many chapters in the history of the world such as the rise and fall of the Republic of Rome, the French Revolutionary Wars and most recently, the aftermath of the Roman empire's destruction in Total War: Attila. Fans of the series have awaited the upcoming Total War: Warhammer and fortunately for them, the release date has finally been set for April 28, 2016.

Total War: Warhammer creates a huge distinction between itself and the rest of the series. While the series used to focus on the history of our own world and nations, Total War: Warhammer will be set in the world of the classic Warhammer Fantasy Battle tabletop game. Players will be able to take control of four unique factions or races to dominate their way to victory: the Empire, the Dwarfs, the Vampire Counts and the Greenskins. Each of these playable factions will be entirely different from each other and they will go as far as to have separate play styles completely. Players will assume the role of one of eight of the Legendary Lords out of the Warhammer fantasy setting and as is the key part of the series, the goal will be to amass an army and conquer through might and tactics.

The tenth entry into the Total War series promises to be a new experience, however. Players will get the chance to rule the skies on the backs of dragons, griffons and wyverns. There will also be magical storms condensed with power, waiting to be harnessed and unleashed by anyone who can tame them. Each Legendary Lord will also feature their own unique narratives and quest chains, and mythic weapons and armor can be uncovered by delving into their stories. Total War: Warhammer will offer players many opportunities to win their games in different ways, whether it's by commanding magic and nature, or seizing the skies and dominating the land by force with ancient and mighty beasts of legend.

As if this wasn't enough good news for Total War fans, Total War: Warhammer will be the first in a trilogy of games that will be getting standalone releases in the future. Pre-ordering the first Total War: Warhammer will provide access to the Chaos Warriors race pack, which will add three new Legendary Lords into the mix, as well as a plethora of new units, abilities and quests for each player to discover.

One solitary edition of the game was not enough to satiate The Creative Assembly's desire to give fans an authentic fantasy feeling, though. Releasing alongside the standard edition of the game will be the Limited Edition which will offer fans a brand new case, adorned with illustrations and embossed with carvings of the Legendary Lords. The Limited Edition will also come with an insider's guide, offering tips and strategies for both new and returning players to the franchise. Purchasing this will also net you with the pre-order bonuses, adding the three new Legendary Lords to your arsenal.

If you thought the developers would stop at a Limited Edition, you would be wrong. The highest tier of purchases for Total War: Warhammer will be their High King Edition. This version will feature many intricate and detailed props from the lore of Warhammer, the first of which being the Grudge Ring. The metal ring boasts to be "high quality" and will double as a functioning six-sided die. The Slayer's Whetstone Pendant is next to be included in this package, and it will be a genuine whetstone, able to sharpen metal while being able to be worn around the neck. For older fans, the Dwarfen Drinking Horn might sound more appealing. Although the drinking horn is intended for display purposes, it can actually be used in a more practical sense. It will be able to hold a full pint of liquid, although the developers claim that you cannot drink from the horn, you may only quaff from it.

Also included within the High King Edition is everything inside the Limited Edition in addition to a canvas map, portraying the map of the world in-game.. As one could expect from a bundle of collector's items, an art book with concepts and design iterations will be included, all packaged within a specially crafted box for the sole purpose of holding your High King swag in royal Dwarfen style. The High King Edition of the game is available for pre-order at a modest $99.99. 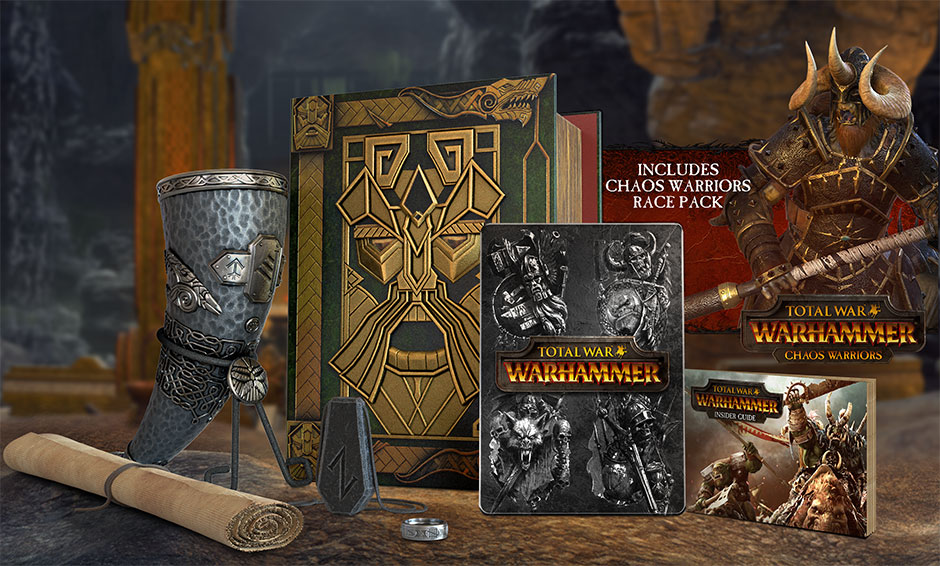 The upcoming Total War: Warhammer trilogy has certainly set its sights, and its standards, quite high in an attempt to redefine the genre of fantasy strategy games. Seeing everything you've seen here, do you think they'll succeed?