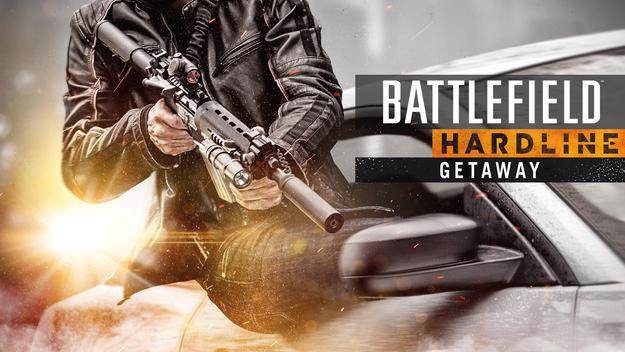 ​
DICE have finally announced the next update for Battlefield: Hardline, and they're aiming for it to be an action-packed expansion filled with fast-paced gameplay. Battlefield Hardline: Getaway will see the criminal players making high-speed escapes from the police across the Mexican border as bullets fly and explosions erupt around them. Players that are enforcing the law will be chasing down the ruthless criminals across the Pacific coast. Whatever side you choose to play on, make sure you slam the pedal to the metal and never let go of the gas. In Battlefield Hardline: Getaway, speed is one thing you can't afford to lose.

With every great criminal heist, a great getaway comes along with it. While some go smooth, others get a little bumpy, and usually end up with a trail of dead cops. If your team isn't organized and careful, they too could end up with a few bullets in them. If you're been designated as the getaway driver, nearly everything rides on your shoulders. Your team's lives, cash, and freedom. The money you make depends not only depends on how fast your drive, but how well your skills are at evading the police. As a getaway driver, it's your job to know every nook and cranny of the streets. Leading your team into a dead end with the police hot on your tail could spell doom for you all.

The Battlefield Hardline: Getaway update will come with new content for players to enjoy. Players will get access to four new huge maps race away from or chase down the enemy team. The new maps are called Pacific Highway, Double Cross, Train Dodge, and Diversion. On these maps players will get to test out the brand new game mode, Capture the Bag. Players will also receive access to 3 new weapons for the Mechanic Class, and one new gadget and melee weapon to use in Hardline's intense ground warfare. The update will also come with 4 new legendary Camos and 4 new vehicles. So if you want to show off your fancy new outfit while evading the police, this update is for you.